African, European, and Asian cities most expensive for expatriates

Staff writer ▼ | July 15, 2014
Two African cities top the list of most expensive cities for expatriates according to Mercer's 2014 Cost of Living Survey. 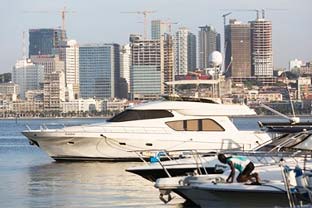 Two African cities top the list of most expensive cities for expatriates according to Mercer's 2014 Cost of Living Survey.


Although not typically recognized as wealthy cities compared to others, Luanda in Angola is the world's most expensive city for the second year in a row followed by N'Djamena, Chad.

Mercer's survey is one of the world's most comprehensive, and is designed to help multinational companies and governments determine compensation allowances for their expatriate employees.

New York is used as the base city, and all cities are compared against it. Currency movements are measured against the US dollar. The survey covers 211 cities across five continents and measures the comparative cost of over 200 items in each location, including housing, transportation, food, clothing, household goods, and entertainment.

Cities in the United States have climbed in the ranking due to the relative stability of the US dollar against other major currencies, in addition to the significant drop of cities in other regions which resulted in US cities being pushed up the list.

A rise in the rental accommodation market pushed New York up 8 places to rank 16, the highest-ranked city in the region. Los Angeles (62) climbed 10 places from last year while San Francisco (74) jumped eighteen places. Among other major US cities, Honolulu (97) is up twenty places, Miami (98), is up sixteen places, and Boston (109) is up fourteen spots. Cleveland (167) and Winston Salem, North Carolina (182) remain the least expensive surveyed cities for expatriates.

Four European cities remain in the top 10 list of most expensive cities. Zurich (5) is the most costly European city on the list, followed by Geneva (6) and Bern (8). Switzerland remains one of the most expensive locations for expatriates following the slight strengthening of the Swiss franc against the US dollar. Moscow (9) and St. Petersburg (35) dropped seven and twelve spots, respectively, due to a dramatic depreciation of the ruble against the US dollar.

Overall, Western European cities have all risen in the rankings mainly due to the strengthening of local currencies against the US dollar.