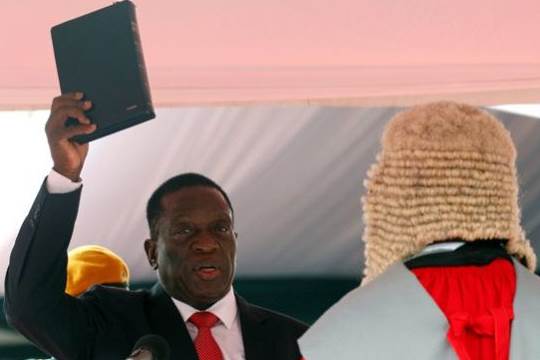 Africa   "The task at hand is that of rebuilding our country"
He said he felt "deeply humbled" to take the role. And he said he was "not oblivious to the many Zimbabweans from across the political and racial divide who have helped make this day."

He paid tribute to his predecessor Robert Mugabe - to muted applause - calling him "a father, mentor, comrade-in-arms and my leader".

Mr Mugabe left office dramatically this week after 37 years of authoritarian rule. His departure followed a power struggle in which Mr Mnangagwa was sacked as vice president to pave the way for Grace Mugabe, the then-first lady, to take up the presidency.

Mr Mnangagwa fled the country but returned to a hero's welcome and on Friday struck a conciliatory tone.

"The task at hand is that of rebuilding our country," he said. "I am required to serve our country as the president of all citizens regardless of colour, creed, religion, tribe, totem or political affiliation." ■

78% of employed UAE residents thinking of starting own business

EWE of Germany to build world's most powerful battery