Staff Writer | July 22, 2017
A Zimbabwean farmers' union leader warned white South African farmers they should agree a deal to share land with the black majority before they suffer the same fate as neighbours in Zimbabwe who were violently removed from their properties. 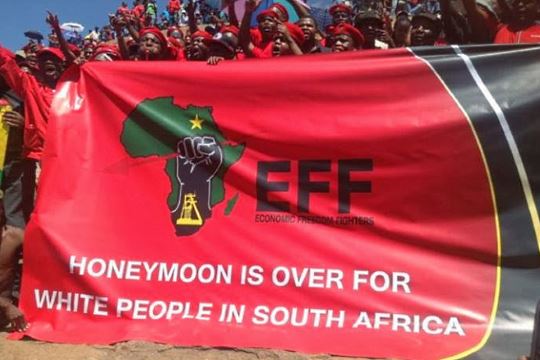 Africa   Many Zuma supporters are demanding land expropriation
Land redistribution is a burning political issue in South Africa and has divided the ruling African National Congress (ANC) ahead of a December conference where President Jacob Zuma's successor as party leader will be chosen.

Although Zuma has said any land reform will be done sensibly and within the law, there are concerns that the populism in South African politics could lead to the scenes witnessed in Zimbabwe in the early-2000s.

Zimbabwean President Robert Mugabe permitted violent land seizures from white farmers, beginning in 2000, that prompted the international community to cut off ties and sent a once-promising economy into a tailspin. ■

Zimbabwe may experience massive power outage over unpaid debt
'Crocodile' returning to Zimbabwe to take over presidency
Mugabe: I won't resign. Thank you and good night