Staff Writer | December 6, 2017
A wildfire erupted in Los Angeles' Bel-Air section as another part of California found itself under siege from an outbreak of wind-whipped blazes. 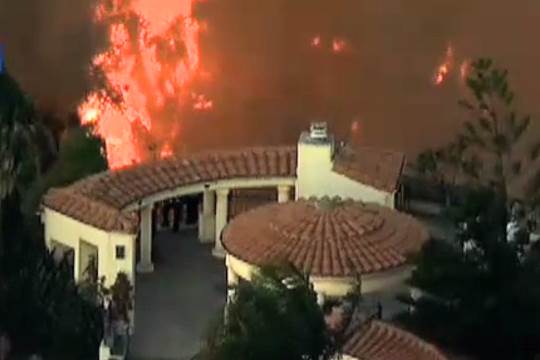 Weather   Southern California
Hundreds of homes across the L.A. metropolitan area and beyond were feared destroyed since Monday, but firefighters were only slowly managing to make their way into some of the hard-hit areas.

As many as five fires have closed highways, schools and museums, shut down production of TV series and cast a hazardous haze over the region. About 200,000 people were under evacuation orders. No deaths and only a few injuries were reported.

From the beachside city of Ventura, where rows of homes were leveled, to the rugged foothills north of Los Angeles, where stable owners had to evacuate horses in trailers, to Bel-Air, where the rich and famous have sweeping views of L.A. below, fierce Santa Ana winds sweeping in from the desert fanned the flames and fears.

Air tankers that were grounded most of Tuesday because of high winds went up on Wednesday, dropping flame retardant. Firefighters rushed to attack the fires before the winds picked up again. They were expected to gust as high as 80 mph at night.

Before dawn Wednesday, flames exploded on the steep slopes of Sepulveda Pass, closing a section of heavily traveled Interstate 405 and burning at least four homes in Bel-Air, where houses range from $2 million to $30 million. ■