Staff Writer | May 8, 2018
Record flooding in the Canadian province of New Brunswick is a sign of the threat of global climate change that will force many to move to higher ground, Canadian media reported. 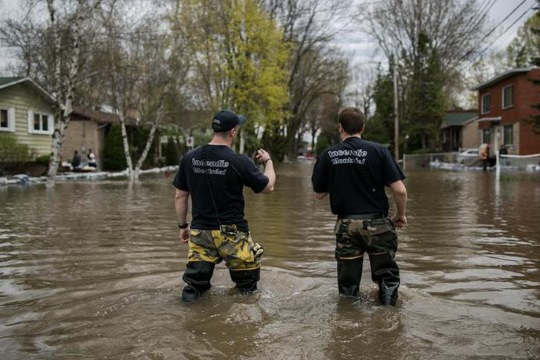 Weather   Record flooding shows world faces watery future, say scientists
The Canadian Coast Guard has been called in to aid those fleeing rising waters, at least a thousand have registered with the Red Cross to say they have evacuated their homes and many others have left to stay with relatives and friends, officials said.

A long section of the Trans-Canada Highway has also been closed.

To make matters worse, the runoff from rivers and streams has affected sewage, and the waters could be “heavily contaminated”, health officials warned.

Environmental scientists said that New Brunswickers and others in various parts of the world should get used to these conditions.

“The reality is that people expect the world to be the way it was, but it’s not,” said Louise Comeau, a professor at the University of New Brunswick and a member of a national panel on climate change adaptation.

“Across the country, there’s an acceleration of what we call the water cycle, which means because the atmosphere is warming, we’re seeing increased precipitation,” said Al Pietroniro, a hydrologist with Environment Canada.

Hydrologist John Pomeroy said the government should consider buying homes from those who have been flooded out so they can move to higher ground.

New Brunswick Premier Brian Gallant said the government must take a more proactive role to deal with the changing conditions.

The maritime province of New Brunswick is bordered on the east by the Gulf of St. Lawrence and the Atlantic Ocean. ■