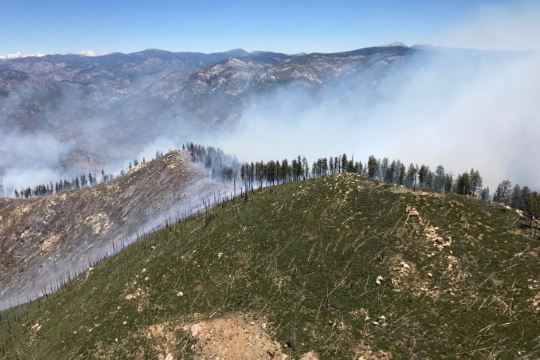 Some fires started due to natural causes, while some were caused by people.

The Schaeffer Fire, which started on June 24 due to lightning, has burned about 15,000 acres in the Sequoia National Forest, the Central Coast Interagency Incident Management Team said on Monday.

Nearly 700 personnel are deployed to fight the fire, which is 11 percent contained.

Sequoia National Forest rangers closed down trails and nearby roads in the Kern River Ranger District Area on Saturday due to the fire. Officials estimate the fire will be contained by July 31.

The Whittier Fire, which started on Saturday, has burned nearly 11,000 acres in Camp Whittier near California's Lake Cachuma, the California Department of Forestry and Fire Protection said on Monday. At least 734 personnel are deployed to fight the fire, which is 5 percent contained.

"Firefighter and public safety remains the top priority. Firefighters will only engage the fire where the probability of success is high and the threat to life and safety remains low," Cal Fire said in a statement.

The Ana Fire, which started on Saturday, has burned more than 3,200 acres about 100 miles southeast of the city of Bend, the South Central Oregon Fire Management Partnership said late Sunday.

Officials have closed down Oregon Route 31 due to the fire, which is 5 percent contained.

More than 900 personnel are deployed to fight the flames, which are being strengthened by hot and windy conditions. The fire has burned down at least three buildings, including a burn and a hunting cabin.

"Weather is expected to remain dry, with winds increasing in the afternoon, making any spark a potential wildfire, the fire agency said in a statement. "Members of the public are asked to be extremely careful with anything that could create a spark, whether equipment, matches, firearms or other items."

About 7,000 people have been forced from their homes, CBC News reported. The fires have been fueled by hot and dry weather conditions. No deaths have been reported.

"As of this evening, 225 wildfires are burning across B.C. including 27 new fire starts from today, the Wildfire Service said in a statement Sunday night.

"The BC Wildfire Service and local emergency services continue to work tirelessly, responding to these fires and helping to keep the public and our communities safe." ■