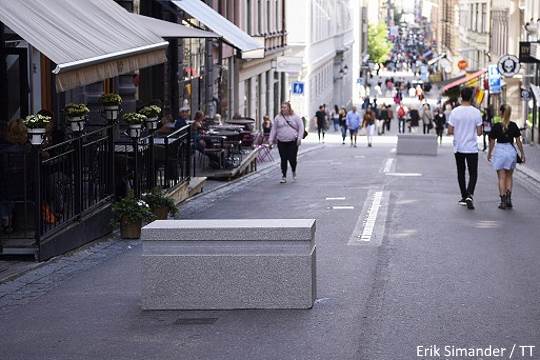 Europe   Physical barriers
Infrastructure Minister Tomas Eneroth hopes to introduce the 'geo-fences' in urban areas next year and which use technology that can digitally stop large vehicles or reduce their speed, THe Local reported.

In April, a stolen van was used to mow down pedestrians on a Stockholm street in a terror attack which killed five people.

Since then, Swedish authorities have worked to increase security against these kind of attacks, including the implementation of more physical barriers in pedestrianized areas, increased video surveillance and tightened security at large public events.

On Drottninggatan, the street targeted in April's attack, authorities have already doubled the number of concrete lions which are in place to stop vehicles driving down the pedestrianized streets.

"Security on our pedestrianized streets has been improved. Directly after the terror attack we put out more stone lions, and we have also ordered heavier versions which are coming next year," said Daniel Halldén, Stockholm's transport commissioner.

The heavier lions will weigh three times as much as those currently in place, at three tonnes each, and will be placed in a way so that vehicles cannot drive straight ahead but are forced to turn, preventing them from being able to increase their speed. ■