Staff Writer | June 15, 2018
The government has instructed West Japan Railway to investigate why a driver of one of its bullet trains that hit and killed a man did not report any abnormal sound at the time, the transport minister said Friday. 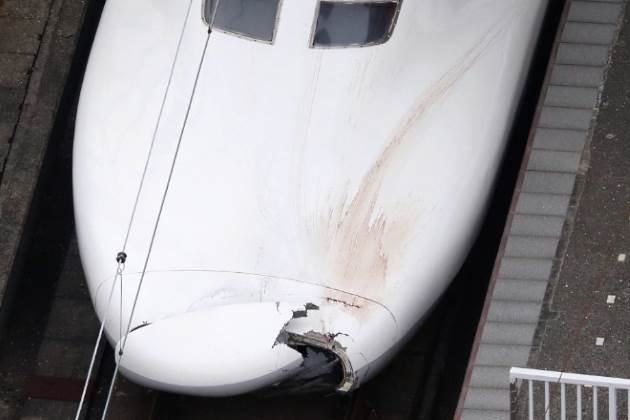 Accident   The incident caused a crack on the bonnet of the train
"I have ordered JR West to study why the driver did not make a report and whether that was an appropriate decision or not," Land, Infrastructure, Transport and Tourism Minister Keiichi Ishii said.

"I sincerely apologize for causing disruption to transportation and inconvenience to over 40,000 customers," said JR West Vice President Yoshihisa Hirano at a press conference on Friday.

A Nozomi shinkansen train bound for Tokyo hit a man, identified as a 52-year-old caregiver from Fukuoka Prefecture, between Hakata and Kokura stations in the southwestern Japanese prefecture at around 2 p.m. on Thursday. An unoccupied car was found on a road near the elevated railway track, which was equipped with a ladder and staircase.

The train hit the man inside a tunnel in the city of Kitakyushu, about 17 kilometers away from Kokura Station.

The incident caused a crack on the bonnet of the train. None of the roughly 200 passengers was injured.

According to the operator of the Sanyo Shinkansen Line, the company's rules require drivers to report to an operation center if they hear abnormal sounds while operating. The driver noticed such a sound but did not report it, judging on past experience that the train had hit a small animal.

JR West came in for criticism after a crack and oil leak were found on the undercarriage of a shinkansen train in December in the country's first serious bullet train incident.

Following the incident, JR West made its new policy clear that drivers must stop the train immediately when hearing strange sounds and are unable to confirm safety. ■

IMF puts itself at odds with Trump over U.S. economy