Staff Writer | July 19, 2017
The Permanent Court of Arbitration has ordered the Russian government to pay the Netherlands $6 million in damages for seizing a Dutch-flagged vessel in international waters. 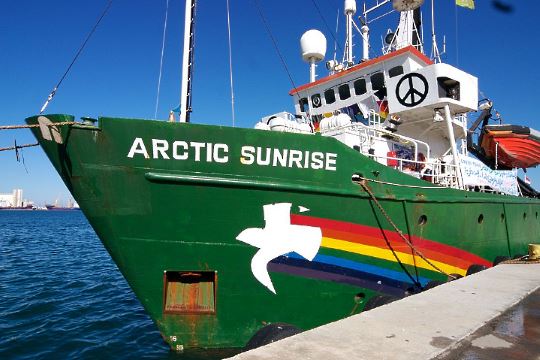 Friends of nature   The activists were held until November
The panel had already ruled that Russia had violated UNCLOS when its agents boarded the ship without the permission of the flag state.

Russia maintains that as the ship was within its EEZ, it was within its rights to act to defend its economic interests, even though the vessel was outside Russian territorial seas.

The vessel, the Greenpeace ship Arctic Sunrise, was involved in a protest in September 2013 in which activists attempted to climb onto Gazprom's Prirazlomnaya platform in the Pechora Sea, about 30 nm off the Arctic coast of Siberia.

The confrontation escalated, and Russian federal security officers boarded the Sunrise, seized the vessel and arrested 30 members of her crew.

The activists were held until November, and the vessel was detained until the following June. Greenpeace said that she showed signs of damage when she was returned.

The court awarded the Netherlands compensation of $5.5 million for wrongful arrest and material damage, plus an additional $740,000 for costs incurred by the Dutch government.

Greenpeace told Reuters that it expects that the Dutch government will pass on any funds paid in connection with the judgement. ■