Staff Writer | May 29, 2018
Ukroboronprom "Kharkiv Morozov Machine-Building Design Bureau" is working to create next-generation combat vehicles that are to enter into service of the Ukrainian Army in 2020. 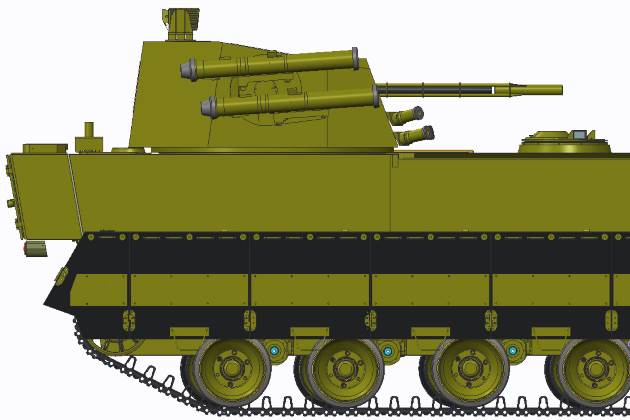 Defense   BMP-U has modular design
The designers and engineers of the SE "Kharkiv Morozov Machine-Building Design Bureau" are focusing on BMP-U development – a new IFV, which is to replace BMP-1 and BMP-2.

BMP-U is intended for transportation and fire support of ground forces. It provides reliable protection for the crew of 3 members and 7 paratroopers. According to calculations, the level of BMP-U protection is 10-12% higher than of BTR-4.

In addition, the engine transmission compartment is located in the front of the vehicle, which guarantees a greater level of crew protection.

BMP-U will be equipped with a 735 hp diesel engine and automatic transmission for high maneuverability and speed on the battlefield. Given the mass of a new infantry combat vehicle of 25-27 tons, BMP-U specific power is at the level of 27-29 hp / t.

This figure is significantly higher than the specific capacity of BMP-1 (21-23 hp / t.) and modern main battle tanks. In addition, the BMP-U will overcome water obstacles.

The BMP-U will be armed with a new combat module BM-8 with improved characteristics. It is equipped with a 30-mm automatic gun, automatic grenade launcher, machine gun, as well as guided anti-tank missiles "Barrier".

BMP-U has modular design and can be used as the base for a whole family of tracked vehicles.

Thus, command vehicle, command and staff vehicle, reconnaissance, medical, repair and evacuation and other types of vehicles will be created on the BMP-U basis. ■