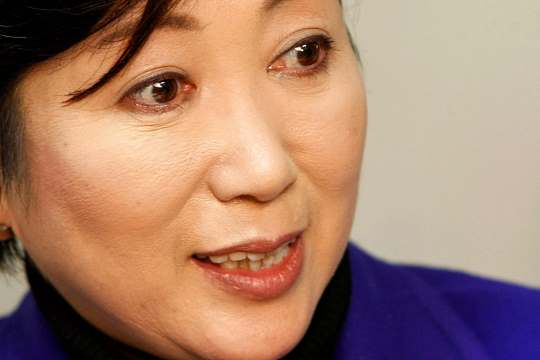 Japan   The first female governor
Forces supporting Koike captured a total of 79 seats out of the 127 seats up for grabs in the election, with Koike's Tomin First no Kai (Tokyoites First party) winning 49 seats, and its major ally in the metropolitan assembly the Komeito party securing 23 seats.

Abe's ruling LDP, meanwhile, won only 23 seats, its lowest-ever level in a Tokyo metropolitan assembly election, according to local media.

A total of 259 candidates contended for the 127 seats up for grabs in Sunday's election, with the LDP backing 60 candidates, while Tomin First no Kai put forward 50.

Both the Democratic Party and Komeito fielded 23 candidates each, while the Japanese Communist Party endorsed 37 candidates.

Before the election, the LDP held 57 seats in the Tokyo assembly, followed by the Komeito party with 22, the Japanese Communist Party with 17, the Democratic Party with seven and Tomin First six.

Koike, Tokyo's first female governor, had been a member of the House of Representatives with the ruling LDP before winning the Tokyo gubernatorial election by a large margin last July without the backing of her party.

She officially quit the LDP last month and became head of the Tomin First no Kai which was formed last September by Tokyo assembly members supporting Koike. ■

Kenya gave $47 million to teachers, asks them not to strike