Staff Writer | November 24, 2017
Several French border crossings with Spain, Belgium or Italy were subject to blockades or retentions because of the protests of French truck drivers, who stand against their occupation's exclusion from the draft of the new European directive on displaced workers. 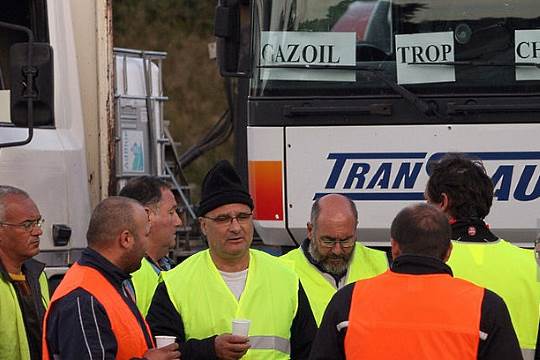 France   "We are currently in a very difficult situation"
The traffic information agency Bison Futé said on its website that shortly after 07.00 local time (06.00 GMT) there was a traffic jam on the A63 motorway at the height of Biriatou, near the border of the Basque Country, due to a blockade and the restriction of traffic to one of the four northbound lanes.

In the north of France, on the border with Belgium, there were also blockades on the A22 from Lille because of a "snail operation" carried out by the trucks involved in the protest, which aimed at slowing down traffic.

In the Alps, about fifty truck drivers held a grip on access to the Fréjus tunnel, on the Italian border.

The general secretary of the federal union of the transport sector of the FGTE-CFDT, Patrick Blaise, justified this protest with the argument that they don't want to become "the low-cost employees of Europe," in statements to the station France Info.

"We are currently in a very difficult situation," said Blaise, who complained that there are not enough controls on the conditions for foreign drivers in charge of transports within France.

He noted that workers arriving from Eastern European countries or Portugal, with wages "well below those of France or Germany" can take some market share in those countries, thereby affecting local professionals.

In his opinion "from the moment you come to work in a country like France, the wages have to be like those of a French worker." ■

Interactive map in UK to help infight against bovine TB