For Trump soldiers born on U.S soil are not American citizens

Staff Writer | June 28, 2018
The U.S. military has begun discriminating against service men and women born in American Samoa, a U.S. lawyer has said. 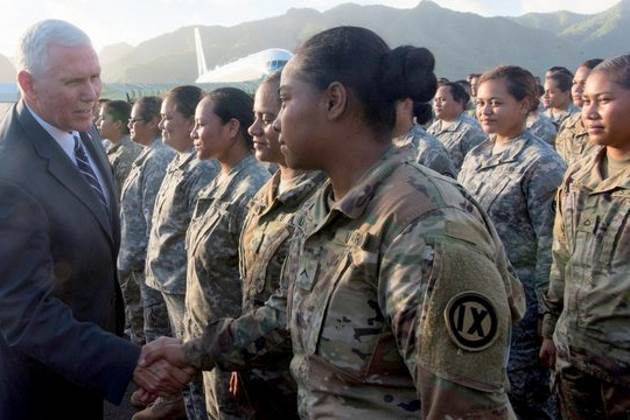 Leiataua said the U.S. armed services are a primary source of employment and income for young people in American Samoa which is known for having the highest enlistment rate of any state or territory.

He said this is set to change.

"The Trump administration has just issued an order saying, okay all of you American Samoan born who are not U.S. citizens will lose your job as officers if you don't get U.S. citizenship, which they then have to apply for and go through the process of naturalisation."

Naturalisation takes around eight months and has a fee of US$680. Applicants must pass English, U.S. History and Government tests and take the Oath of Allegiance.

American Samoans are born with their allegiance to the United States according to Leiataua.

The officers who don't naturalise would lose their commissions and others would miss out on the chance of promotion he said.

Leiataua Charles Ala'ilima is one of a group of lawyers seeking to have those born in the U.S. territory automatically recognised as U.S. citizens.

His clients argue that their American Samoan birthright entitles them to full citizenship under the US Constitution.

A clause in the Constitution says all people born on U.S. soil are automatically entitled to citizenship.

When the U.S. acquired American Samoa in 1900, said Leiataua, it became part of the nation.

Leiataua is working with the plaintiffs John Fitisemanu, Pale Tuli and Rosavita Tuli, who have filed a motion with the Utah District Court against the U.S. Justice Department.

However, the department responded earlier this month saying only Congress had the authority to define the relationship between territories and the mainland.

"There are two types of citizenship. Citizenships granted by Congress and citizenships by birth on U.S. soil," he said.

"If you're born on U.S. soil, you are a U.S. citizen so we do not have to have an act of congress to make American Samoan born people US citizens." ■

Cuba plants over 17,000 hectares of forests every year