Christian Fernsby ▼ | May 31, 2020
Tense protests over the killing of a black detainee by a white police officer grew around the United States, with police cars set ablaze and reports of injuries mounting on all sides as the country. 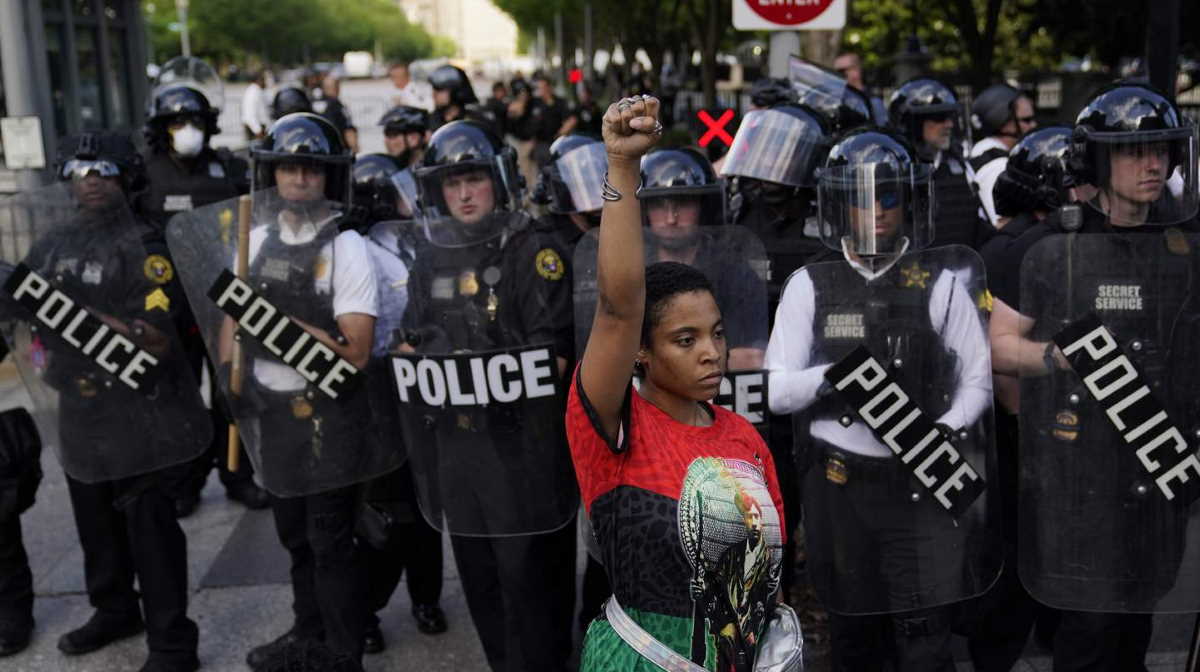 Protests   U.S. protest
New York police are investigating a video that appears to show a patrol vehicle plowing through a crowd during Saturday's protest.

The 27-second video, which was posted to Twitter, shows an NYPD truck in front of a crowd throwing objects at the vehicle. There is a barricade in front of the truck.

The truck then appears to drive into the barricade, knocking over protesters. Screaming and yelling are then heard while a person is seen jumping on top of the truck. It's unclear if there were any injuries.

This incident further fuels the flames of negative interactions between police and the people they're sworn to protect.

A lot of the protests erupting in major cities across the US are the result of people's anger boiling over after the death of unarmed black man George Floyd at the hands of police in Minneapolis.

Mayor Bill de Blasio said the incident is under investigation, but emphasised that the officers may have had no other choice.

"I'm not going to blame officers who were trying to deal with an absolutely impossible situation. The folks who were converging on that police car did the wrong thing to begin with, and they created an untenable situation," he said.

"I wish the officers had found a different approach, but let's begin at the beginning. The protesters in that video did the wrong thing to surround that police car, period."

The mayor also emphasised late on Saturday that he had spoken with community leaders and there is a possibility that there are protesters who are intentionally trying to incite violence including those who have come to New York City from other places.

"People who represent the communities of our city and the residents of our city are not joining negative and violent protests," de Blasio said.

Earlier, Governor Andrew Cuomo said he ordered the state attorney general to independently review the events of Friday's protests that included protesters clashing with police in Brooklyn and other boroughs.

De Blasio also said it was a small number of protesters who turned to violence.

"A small number of people in the scheme of things protesting to begin with, very few of whom committed acts of violence, but that few were systematic in their efforts to harm police officers and to create damage to police vehicles, to store fronts, to other property.

"And again that's not going to get us anywhere. So to the peaceful protesters, if any of you are still out there tonight, who are trying to work peacefully for change, let me be very clear.

"We hear your desire to see these issues, relationship between police and community, the need for justice, the need for real change in our society. We hear you loud and clear. We appreciate respect to all peaceful protest. But now it is time for people to go home."

A Fox News reporter was pummelled and chased by protesters who had gathered outside the White House early Saturday as part of American unrest following the death of George Floyd.

Demonstrators also broke windows and vandalised the Atlanta office building where CNN is headquartered, and police in Louisville, Kentucky, apologised on Saturday after an officer fired what appeared to be pepper bullets at a television news crew.

Fox's Leland Vittert was rattled following the Washington attack he said was clearly targeted at his news organisation.

"We took a good thumping," he told The Associated Press. A live shot he was doing was interrupted by a group of protesters who began shouting "f... Fox News".

Flanked by two security guards, he and photographer Christian Galdabini walked away from Washington's Lafayette Park trailed by an angry group before riot police dispersed them.

“Big crowd, professionally organized, but nobody came close to breaching the fence. If they had they would have been greeted with the most vicious dogs, and most ominous weapons, I have ever seen. That’s when people would have been really badly hurt, at least,” President Donald Trump said abut the White House. ■