Staff Writer | July 19, 2017
Around 160 fires are currently active in the Canadian province of British Columbia (BC), where according to preliminary reports, more than 1,880 square kilometers of woods have been devastated since April 1. 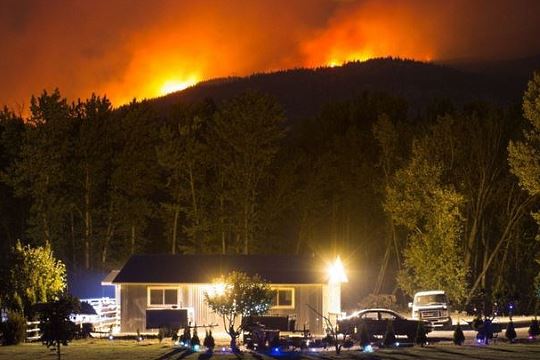 Weather   $600 for every victim
According to the National Defense Department, the Armed Forces sent two planes and five helicopters to contribute to the evacuation tasks, when around 40,000 people were forced to leave their homes amid the increasing threat of the flames.

The authorities in BC allocated $100 million for emergency funds managed by the Canadian Red Cross, which will give $600 to every victim of these fires, the facing up of which have cost the provincial administration more than $90 million USD.

Around 360 firemen from all around the country will join those who are already involved in fighting the flames in the territory, while the authorities confirmed that Prime minister Justin Trudeau approved the assistance petition presented by the provincial government.

Kevin Boon, manager of the Cattle Farmer Association in BC, told the newspaper Vancouver Sun that 30,000 bovines were threatened by the fires. Thus, they are making efforts to move them to safe places.

Other economic centers and several important industries were forced to finish their operations in recent days, faced with the disaster in the territory. ■