Roger Quinn ▼ | October 10, 2010
While working and collecting experience, you can subconsciously learn some things that can be devastating for your career. Go through our list and if you find yourself in just one of these situations - change you behaviour at once. 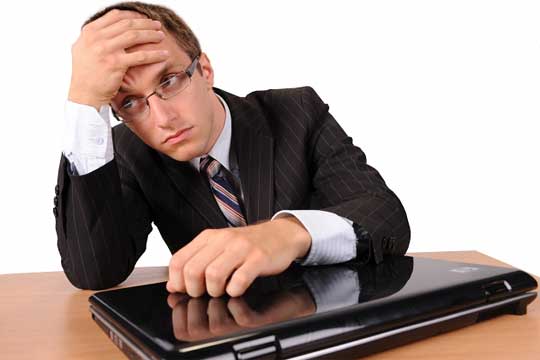 While working and collecting experience, you can subconsciously learn some things that can be devastating for your career. Go through our list and if you find yourself in just one of these situations - change you behaviour at once.


We all know that soft skills are very important for your career. Education and experience are a must, but soft skills are something that will lift you above the crowd or bring back to square one. We collected here the most mistake you can do at work, along with advice how to avoid them and climb that corporate ladder with confidence.

Let's start with the phrase "Trust me". You are entitled to say that to your boss if and only if you are the star. Recall what we wrote about company's stars: They work their own way but they are the most valuable and proven employees in the company. If you are one of them, proved many times over and over again, you can say to your boss "Trust me on this one". If you are not - don't say that. Your boss will "Trust me" and "Don't worry" translate to "Give that job to somebody else". Do it a few times and you're gone.

If you know everything about your job that's good. If you know something about other jobs that's even better. But you can't know everything. You can be a Nobel prize winner in your domain but you can't be an expert in finance, human resources, sales, sandwiches, football, cooking... Managers love to have educated people by their side but nobody loves to hear listen-to-me-I-know-it-all colleagues.

There is a reason for that: you can't know everything. So, stick to your job, learn a thing or two aside but don't pretend to be as smart as CEO, CFO, CTO and CIO, all in one person.

Somewhat related to that, you also must be aware of "I'll do that" phrase. Unfortunately, we saw such examples when "I'll do that" was the answer to each and every question. Needles to say, such situations don't end well. Don't think that you must answer to any demand with "I can". Nobody's perfect, be aware of that - your boss already is - and it's OK to admit when you can't do something. Don't promise what you can't deliver over and over again or your boss will promise you that you'll be fired and he will keep that promise.

"That's how I did that at another company." Now, if you don't have a reason written in stone, don't say that. Remember, you are not in another company, and it really doesn't matter how you solved problems at your old workplace. You are now in another environment, in different circumstances and you should adapt your capabilities to the new situation.

So, don't mention how you did it in the past, just don't mention other companies and do your job. Use your experience, use them to bring something useful to your current company and don't refuse the job just because you did it differently before.

We know that you want that better job now, but don't rush. "OK, let's do it!" should be used very carefully. We know that every CEO, shareholder and investor looks fearless, but they are not. Don't think that they are jump to every idea with "Let's do it!" because they don't.

When your CEO make a decision that sound totally crazy remember that he studied a lot of possibilities, talked to a number of people, made a thorough calculations, saw how the market reacts to the idea, and after all that said and done he made a decision. So, learn from him: if you are convinced, with arguments, that something should be done don't jump ahead. Or you could jump over the cliff.

If you found yourself in one or, God forbid, more of these situations - change your attitude immediately. Stop and think a bit, and then react. Your career will be thankful. Trust us on this one. ■

Tropical rain in your bathroom