How to make a decision? A good one, if possible

Ted Blackwater ▼ | July 6, 2015
If you are starting as a young leader, one question that most probably came to your mind is how to be sure you made a good decision. And how older managers can be so sure about theirs? 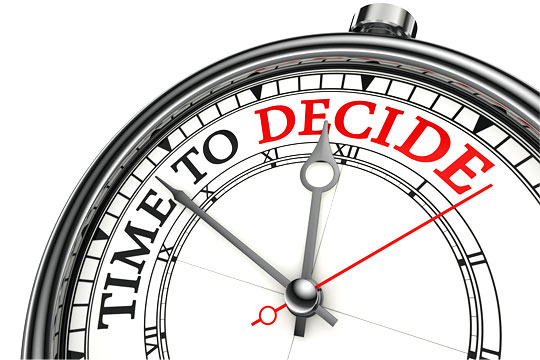 Brain in the office   Think fast, act brave, decide
For every business person a decision making process is what they do, making decision is their job on which sometimes hundreds of people depend. So, with one wrong decision you can ruin lives of many. Well, now when we started with a not so lovely fact, let's see how to avoid bad decision and in fact we'll see that one decision, contrary to what you were taught, won't destroy the whole company.

Let's say first what the theory says about decision making. Stay with us, it won't be long and scary. So, the path would be: identify the problem, analyze the possible solutions, evaluate the best possibility, and make the decision. This is nice but we have some problems here: we often don't have enough time to go through all that, sometimes we don't know what the best possibility is, and sometimes we don't have all the information we'd like to have.

So, what can we do? The first rule is trust your gut first and information later. Experience leader came with an idea and then are collecting information to see is that idea viable or not. Because no brilliant idea was born out of vast collection of data. If that was the case, computers would be the best innovators out there and we know they can't tell should we eat an apple or a pie. So, the idea first.

Second, collect experience. When you see your more experienced boss making a decision in a second, and a great decision for that matter, you don't see what's going on inside his brain. But we will tell you: he processes more information than you know, in fraction of a second threw away what he think won't work, and most probably knew a part of the solution before you finished your question. He doesn't need a check list, he learned that from experience and his brain automatically sorts good solutions from bad ones.

Third, you'll never have all information you'd like to have. Or, in some case, looooove to have. Get used to it: your job is to overcome your own insecurities and make a decision based on insufficient facts. This is one of the hardest things in life and you most probably saw at least one person who can't make a decision. That's all in the brain: your brain doesn't like insecurities and it's very hard to choose one idea over another if outcomes are not known.

So, sometimes you have to say "Now's the time" and you must decide something. Remember: no decision is the worst thing you can do. No matter are you right or wrong, any decision is better than sitting in the office doing nothing.

And fourth, keep your eyes on the goal. No matter what your goal may be, a new product or conquering the world, always have that goal in mind. That will help you making a thousand of smaller decision that will gradually lead you toward your success. And if you conquer the whole world, please don't forget who gave you these advice. ■

Obstacles on your way to a new, great product
Mistakes a boss must not make
Why workers prefer to be fired by individual than by committee

Percent of Americans against First Amendment down to 19% from 38%