Staff writer ▼ | June 23, 2015
The world's largest cruise ship is taking shape in France and getting ready for a bon voyage during its initial trip from Barcelona to Rome in April of 2016 after construction is complete. 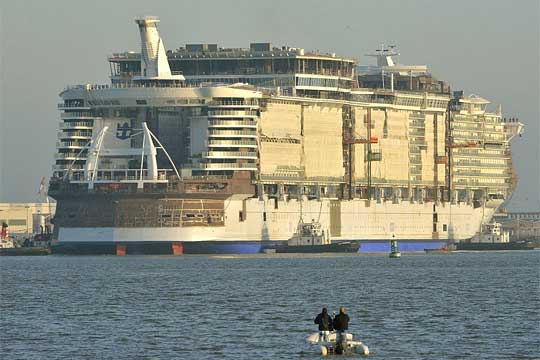 The 16-deck ship, which will have seven distinct neighborhoods and carry 5,479 passengers along with 2,394 crew members, received the last of its construction blocks earlier this week.

In addition to sailing from Spain and Italy, the boat will also make stops in London and Fort Lauderdale, Florida, in the United States, according to Cruise Critic.

With a gross tonnage of 226,000, a length of 1,187 feet and maximum cruising speed of 23 knots, the Harmony will be the third in Royal Caribbean's Oasis class of ships.

It will be slightly larger and more fuel efficient than its sister ships the Oasis of the Seas and Allure of the Seas. Once the massive vessel is complete, it will have three multi-story waterslides which will spiral over the Central Park area of the ship ten decks below.

Central Park will have living trees and real grass, the Orlando Sentinel reported. Josh Martin, the president of an engineering firm that worked with designers on the water park, said: 'This are the first water slides Royal Caribbean has put on a ship.

In addition to 2,747 staterooms and 20 dining options, the Harmony will have two rock-climbing walls, zip lines, an ice skating rink, a full-size basketball court and a miniature golf course. ■