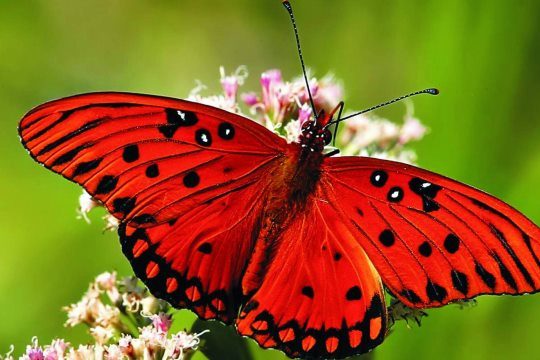 Nature   The overwintering life stage
This is according to research from the University of East Anglia (UEA).

Researchers investigated the impact of Extreme Climatic Events (ECEs) on butterfly populations. The study shows that the impact can be significantly positive and negative, but questions remain as to whether the benefits outweigh the negative effects.

While it is well known that changes to the mean climate can affect ecosystems, little is known about the impact of short-term extreme climatic events (ECEs) such as heatwaves, heavy rainfall or droughts.

Osgur McDermott-Long, PhD student and lead author from the School of Environmental Sciences at UEA, said: "This is the first study to examine the effects of extreme climate events across all life stages of the UK butterflies from egg to adult butterfly.

"We wanted to identify sensitive life stages and unravel the role that life history traits play in species sensitivity to ECEs."

The researchers used data from the UK Butterfly Monitoring Scheme (UKBMS), a high-quality long-term dataset of UK butterfly abundances collected from over 1,800 sites across the UK, spanning 37 years, to examine the effects of weather data and extreme events (drought, extremes of rain, heat and cold) on population change.

The team looked at resident species of butterflies, those which only breed once in a year, and those having more than one brood annually. Multi-brood species were found to be more vulnerable than single brood species and in general extremes of temperature rather than precipitation were found to influence changes in butterfly populations.

Dr Aldina Franco, co-author said: "A novel finding of this study was that precipitation during the pupal (cocoon) life-stage was detrimental to over one quarter of the species.

"This study also found that extreme heat during the 'overwintering' life stage was the most detrimental extreme weather event affecting over half of UK species.

"This may be due to increased incidents of disease or potentially extreme hot temperatures acting as a cue for butterflies or their larvae to come out from overwintering too early and subsequently killed off by temperatures returning to colder conditions."

In addition to the negative impacts, the authors found that some life stages may benefit from climatic extreme weather, with extreme heat in the adult stage causing a positive population change in over one third of the UK species. ■