Voyager 1 on the edge of infinity

Staff writer ▼ | December 15, 2012
On September 5, 1977, Voyager 1 launched from Cape Canaveral aboard a Titan-Centaur rocket. Its journey to the stars just entered a new phase: Voyager 1 is exiting our solar system. 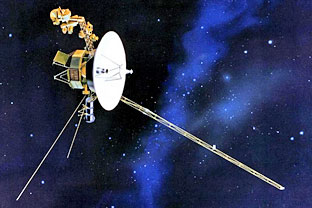 On September 5, 1977, Voyager 1 launched from Cape Canaveral aboard a Titan-Centaur rocket. Its journey to the stars just entered a new phase: Voyager 1 is exiting our solar system.


NASA's Voyager 1 spacecraft has entered a new region at the far reaches of our solar system that scientists feel is the final area the spacecraft has to cross before reaching interstellar space.

"We now can taste what it's like on the outside because the particles are zipping in and out on this magnetic highway. We believe this is the last leg of our journey to interstellar space. Our best guess is it's likely just a few months to a couple years away. The new region isn't what we expected, but we've come to expect the unexpected from Voyager," said Edward Stone, Voyager project scientist based at the California Institute of Technology, Pasadena.

Voyager 1 is the most distant human-made object, about 18 billion kilometers (11 billion miles) away from the sun. The signal from Voyager 1 takes approximately 17 hours to travel to Earth. Voyager 1 carries a golden record in case it ever encounters advanced alien life.

Voyager data from two onboard instruments that measure charged particles showed the spacecraft first entered this magnetic highway region on July 28, 2012. The region ebbed away and flowed toward Voyager 1 several times. The spacecraft entered the region again August 25 and the environment has been stable since.

"If we were judging by the charged particle data alone, I would have thought we were outside the heliosphere," said Stamatios Krimigis, principal investigator of the low-energy charged particle instrument, based at the Johns Hopkins Applied Physics Laboratory, Laurel, Md. "But we need to look at what all the instruments are telling us and only time will tell whether our interpretations about this frontier are correct." ■

The best Silverado ever? Oh, yes.

Why we don't care about search engines