Christian Fernsby ▼ | October 22, 2019
Some 70 percent of all Earth's volcanism takes place under the ocean waves. 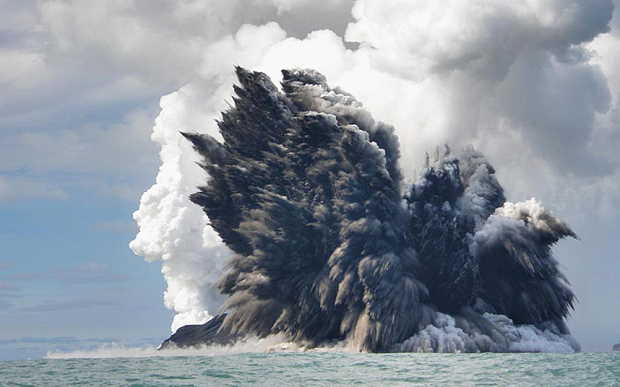 World   Underwater volcano eruption
That statistic is a problem for scientists eager to learn more about underwater volcanoes, which, due to their submarine environment, are difficult to study.

New research shows a clever workaround, though – as well as revealing an incredible side effect of intense magma eruptions at the bottom of the sea.

In a new study, a team led by geophysicist John Lyons from the US Geological Survey's Alaska Volcano Observatory analysed recordings of low-frequency sound in the atmosphere (called infrasound) produced by over 70 explosive eruptions that took place at the underwater Bogoslof volcano off the coast of Alaska between 2016 and 2017.

Due to its remote location, Bogoslof is rarely witnessed when it erupts, but historical accounts tell vivid tales of what it looks like when a submerged volcano lets loose.

An eyewitness account observed from the steamer Albatross in 1908 describes a "colossal soap bubble" rising out of the ocean, with "gigantic clouds of smoke and steam", while another reports a "gigantic dome-like swelling" of water "as large as the dome of the capital at Washington … like a huge bubble pushing its way through the water".

Thanks to Lyon and his team, we now have a scientific explanation for these mysterious historical descriptions of Bogoslof's colossal dome-like gas bubbles.

The researchers came up with a model for the probable source mechanism of the volcano's deep rumbles.

"The infrasound originates from the oscillation and rupture of magmatic gas bubbles that initially formed from submerged vents, but that grew and burst above sea level," the authors explain in their paper.

"We model the low-frequency signals as over-pressurised gas bubbles that grow near the water–air interface, which require bubble radii of 50–220 metres."

If the researchers are right in their calculations, these noxious, gassy volcano bubbles could extend up to 440 metres (over 1,400 ft) in diameter.

That would make them about the height of Malaysia's Petronas Towers (the tallest buildings in the world until 2004), yielding an immense bubble volume that could easily swallow multiple Great Pyramids of Giza.

Quite the spectacle to see rising ominously out of the ocean – even before it inevitably bursts. ■

What exploded in our galaxy?
Widespread methane seeps off Oregon coast
Early Earth's air weighed less than half of today's atmosphere