Staff writer ▼ | August 1, 2014
Australian and African scientists are collaborating to genetically modify bananas into a rich source of vitamin A. A trial crop is bearing fruit Queensland and the first bunches have been sent to the United States for human trials. 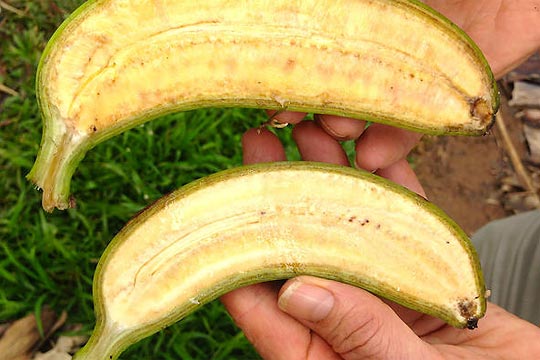 Life saving banana   Australian and African scientists working together
On the outside the bananas look like the ordinary Cavendish variety, but what is under the peel is what counts, agricultural scientist Jean-Yves Paul said.

"So this is the fruit from one of our best lines, 324 A5. As you can see, it’s yellower than an ordinary banana and you can see the orange specks in there in high concentrations."

The bananas in this test crop in Innisfail have been genetically modified with carotene, which the body converts to vitamin A, sbs.com.au reports. Papua New Guinean bananas provided the gene that was spliced with local varieties to create a highly nutritious super food.

Horticulturist Jeff Daniells from the Queensland Department of Agriculture, who helped source the Papua New Guinean variety, said the Asupina variety was collected in Papua New Guinea about 25 years ago.

"It’s a very special sort of banana. One of the characteristics found out about 10 years or so ago was that this type of banana naturally has very high levels of beta-carotene, but some of the eating aspects of this plant aren’t really what’s looked for by most people."

The super banana project has received $10 million from the Bill and Melinda Gates Foundation to help reduce global hunger.

"Vitamin A deficiency is probably the third largest of the public health problems in the world. Somewhere between 600,000 and two million children die every year of vitamin A deficiency, a horrendous human toll, another million or so go permanently blind," project leader Distinguished Professor James Dale said. ■