Staff Writer | July 25, 2016
Solar Impulse 2 is approaching the end of its epic bid to become the first sun-powered airplane to circle the globe without a drop of fuel. 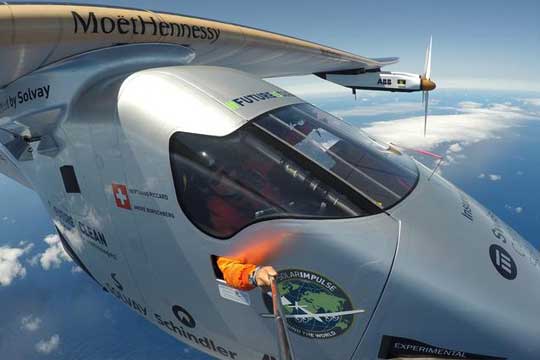 Renewable energy   The first sun-powered airplane
When the experimental aircraft touches down in Abu Dhabi in the early hours of Tuesday it will cap a 26,097 mile journey across four continents, two oceans and three seas.

With Swiss explorer and project director Bertrand Piccard in the cockpit, the plane is due to land at Al-Bateen Executive Airport in the UAE capital where it launched its tour on March 9, 2015.

On Monday Solar Impulse 2 was flying over the Saudi desert north of Riyadh, heading towards the Gulf.

"After a turbulent night from extreme high temperatures, the sun rose above a desert of sand dunes above #SaudiArabia," Piccard said on Twitter.

Solar Impulse 2 is circumnavigating the globe in stages, with 58-year-old Piccard and Andre Borschberg taking turns at the controls of the single-seat aircraft.

It took off from Cairo on its final leg early on Sunday, having previously crossed Asia, North America, Europe, and North Africa. ■