Staff Writer | November 2, 2016
Bridge collapses are rare, but there have been enough of them to raise concerns in some parts of the world that their condition is not sufficiently monitored. 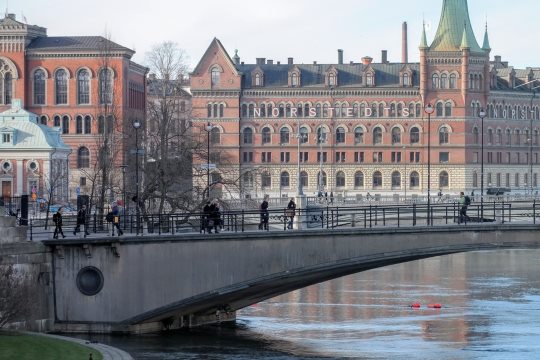 The engineer behind the ongoing project, Raid Karoumi, a professor in the division of Structural Engineering and Bridges at KTH, says that while the internet connections aren't a substitute for visual inspections, they do provide valuable information about how bridges are impacted by traffic, wind and temperature fluctuations.

"Just as a doctor places a stethoscope and heart rate sensors on your chest, we put our sensors where we want to monitor the condition of the bridge," Karoumi says. And just like a heart monitor, the sensors pick up deviations that can indicate something is starting to change

The real-time detection could extend the life of bridges. One older bridge near the KTH campus, which connects the city of Stockholm to Lidingö, a large island in the eastern part of its archipelago, is slated to be replaced in 2020.

But the sensors, which will soon be installed, will provide such detailed information about its state that the bridge may be allowed to stand for another 10 years from now, he says.

Bridges undergo change slowly. In the streams of real-time data Sweden's sensors are delivering – as many as 400 pieces of information per second on some bridges – engineers are looking for clues to what causes wear and tear. Karoumi says that with the technology they can detect cracks that aren't even visible to the naked eye.

"Of course you drive still out and look," he adds. "But this technology will help to determine when and where an inspection is required, and it will also provide valuable information to those who perform the inspections. It is costly to block traffic so it is good if the inspections are made when necessary."

But aging bridges aren't the only ones getting connected

A bridge that connects Sweden and Norway over the Svinesund sound was fitted with 72 sensors when it was completed in 2005. Researchers at KTH have reaped 10 years' worth of data from the specially-designed bridge – which is supported by a single concrete arch.

The sensors are operated either with cables or batteries. The idea is that the cordless sensors can be recharged with the energy generated by the oscillations when the bridge vibrates. ■