Self-destructing fruit fly coming soon to tree near you

Staff writer ▼ | August 29, 2014
A genetically modified fruit fly which ultimately kills itself off has been developed by scientists in the United Kingdom, leading to hopes that it could prove to be cheap and effective way of preventing crop damage without the need for pesticides. 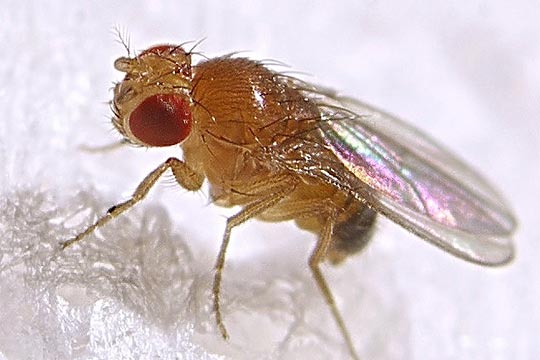 Genetics in the air   How to prevent the spread of dengue fever
Oxfordshire-based biotech company Oxitec has produced male genetically modified flies that are only capable of producing male offspring as they contain a lethal gene that kills the females before they become adults. This eventually results in the fly population dying off as the males can no longer mate.

Extensive field trials carried on mosquitos in Brazil to prevent the spread of dengue fever have proved highly effective, killing off 96 per cent of the mosquitos spreading the disease.

Brazils National Technical Commission on Biosecurity has now given the go-ahead for trials on Mediterranean fruit flies which cause significant damage to fruit crops around the world. Oxitec has also requested to start trialling GM insects in Europe to control olive flies in Spain.

Oxitec's Philip Leftwich says there was no reason to suggest that releasing the flies would have a long-term impact on the environment. "The nature of the modification to the flies, it’s important to stress, is that it makes them disadvantageous to their local counterparts in that they can only produce sons," he said. "If we stopped releasing these individuals they would quickly be removed from the gene pool." ■