Staff writer ▼ | June 14, 2013
The further you go, the more you spend. No wonder then, that a group of scientists seek $1 billion: they want to build a telescope able to detect alien life 70 million light years away. 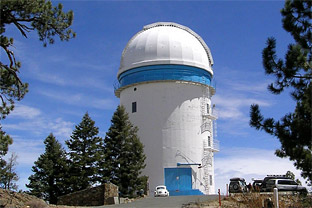 The further you go, the more you spend. No wonder then, that a group of scientists seek $1 billion: they want to build a telescope able to detect alien life 70 million light years away.


The 250-foot telescope, for which Baja California in Mexico is most likely building site, would be able to detect alien life 60 to 70 million light years from Earth and it would take five years to make. The group plans to use mirrors to try to pinpoint heat sources generated by an alien civilization. Although the telescope is still in "It would be nice" phase, the scientists are sure they could built it fast and that results should come.

"If we had an investor come and say, 'Look, here are the resources you need,' we could have the telescope built within five years," Jeff Kuhn, an astronomer at the University of Hawaii's Institute for Astronomy, told for Space.com.

The scientists think that the San Pedro Martir mountains in Baja California, Mexico, would be a good location for the alien-hunting telescope. The group says humankind need better tool to find alien life on distant planets and that extraterrestrial living creatures haven't been found because our existing equipment is not up to the task.

"The biggest telescopes that we're likely to see in the next 100 years or so will not be able to directly image cities or organized structures on the planet," said Mr. Kuhn.

Since his team's idea is to search for heat evidence, it is obvious that our alien relatives would have to be advanced enough to generate heat, and to generate enough of it to be seen from Earth.

"It is possible to be confused on a planet which is perpetually cloud-covered, and we wouldn't be able to detect a signal on a planet where somehow the alien society managed to uniformly distribute itself around the planet so it isn't clustered," said Mr. Kuhn.

And there's another thing for those thinking that aliens are maybe hostile inclined: you don't have to worry: the proposed telescope will be designed as a passive receiver that will allow researchers to see without being seen. That would satisfy even one the greatest human minds, Stephen Hawking, who has warned that alerting aliens of our own existence could prove a catastrophic mistake.

"If aliens visit us, the outcome would be much as when Columbus landed in America, which didn't turn out well for the Native Americans," said Mr. Hawking in a documentary. If you put it that way, the idea of a passive telescope seems very reasonable. We have no doubt that wealthy investors will bring some money to the table because, let's be honest, $1 billion is not such a huge amount for top businessmen and investors. ■