Staff writer ▼ | September 9, 2013
Russian scientists have developed an environmentally safe and effective way of dealing with marine oil spills. Moskat powder made the water clean in a matter of minutes. 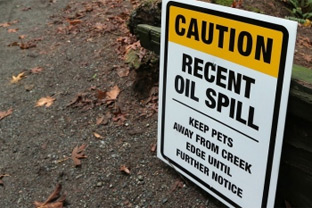 Russian scientists have developed an environmentally safe and effective way of dealing with marine oil spills. Moskat powder made the water clean in a matter of minutes.


The powder Moskat consists of 96-per-cent consisting of natural minerals treated under high pressure and temperature. The main component in the mixture is zeolite.

Russian scientists have presented their know-how at Asia's leading science and technology exhibition that was held in Bangkok throughout August.

"We simply spray this powder on an oil spill. Oil molecules are destroyed and transformed into particles that, effectively, form part of any soil," Vladimir Lukoyanov, a Southeast Asia representative of the Russian House of International Science and Technology Cooperation, told ITAR-TASS.

Mr. Lukoyanov accompanied his words with a short but very effective demonstration. A small oil slick in a glass of water did indeed start to shrink right after it was treated with Moskat. A minute later the water surface was absolutely clean, with just a bit of sediment, looking like ordinary sea mud, floating at the bottom of the glass.

"Fish can live in this water and feed on this sediment," Mr. Lukoyanov said. Scientists estimates that it will take about 250 kg of the powder to treat one tonne of spilt oil. Moskat is also cheap, approximately $450 per tonne, while its equivalents, according to Mr. Lukoyanov, cost at least $1,500-2,000. ■