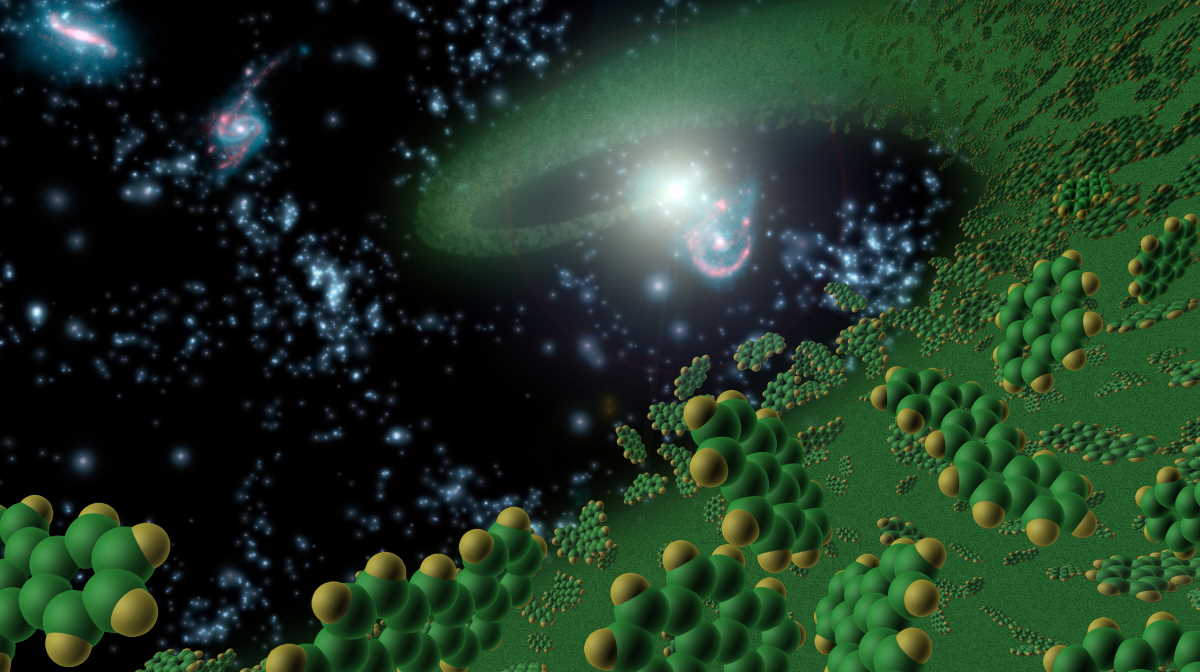 World   Polycyclic aromatic hydrocarbons
The team's research has now identified several avenues by which ringed molecules known as polycyclic aromatic hydrocarbons, or PAHs, can form in space. The latest study is a part of an ongoing effort to retrace the chemical steps leading to the formation of complex carbon-containing molecules in deep space.

PAHs which also occur on Earth in emissions and soot from the combustion of fossil fuels could provide clues to the formation of life's chemistry in space as precursors to interstellar nanoparticles. They are estimated to account for about 20 percent of all carbon in our galaxy, and they have the chemical building blocks needed to form 2D and 3D carbon structures.

In the latest study, published in Nature Communications, researchers produced a chain of ringed, carbon-containing molecules by combining two highly reactive chemical species that are called free radicals because they contain unpaired electrons. The study ultimately showed how these chemical processes could lead to the development of carbon-containing graphene-type PAHs and 2D nanostructures. Graphene is a one-atom-thick layer of carbon atoms.

"This is something that people have tried to measure experimentally at high temperatures but have not done before," said Musahid Ahmed, a scientist in Berkeley Lab's Chemical Sciences Division. He led the chemical-mixing experiments at Berkeley Lab's Advanced Light Source (ALS) with Professor Ralf I. Kaiser at the University of Hawaii at Manoa. "We believe this is yet another pathway that can give rise to PAHs."

Professor Alexander M. Mebel at Florida International University assisted in the computational work for the study. Previous studies by the same research team have also identified a couple of other pathways for PAHs to develop in space. The studies suggest there could be multiple chemical routes for life's chemistry to take shape in space.

"It could be all the above, so that it isn't just one," Ahmed said. "I think that's what makes this interesting."

The experiments at Berkeley Lab's ALS which produces X-rays and other types of light supporting many different types of simultaneous experiments used a portable chemical reactor that combines chemicals and then jets them out to study what reactants formed in the heated reactor.

Researchers used a light beam tuned to a wavelength known as "vacuum ultraviolet" or VUV produced by the ALS, coupled with a detector (called a reflectron time-of-flight mass spectrometer), to identify the chemical compounds jetting out of the reactor at supersonic speeds.

The latest study combined the chemical radicals CH3 (aliphatic methyl radical) with C9H7 (aromatic 1-indenyl radical) at a temperature of about 2,105 Fahrenheit degrees to ultimately produce molecules of a PAH known as naphthalene (C10H8) that is composed of two joined benzene rings.

The conditions required to produce naphthalene in space are present in the vicinity of carbon-rich stars, the study noted.

The reactants produced from two radicals, the study notes, had been theorized but hadn't been demonstrated before in a high-temperature environment because of experimental challenges.

"The radicals are short-lived they react with themselves and react with anything else around them," Ahmed said. "The challenge is, 'How do you generate two radicals at the same time and in the same place, in an extremely hot environment?' We heated them up in the reactor, they collided and formed the compounds, and then we expelled them out of the reactor."

Kaiser said, "For several decades, radical-radical reactions have been speculated to form aromatic structures in combustion flames and in deep space, but there has not been much evidence to support this hypothesis." He added, "The present experiment clearly provides scientific evidence that reactions between radicals at elevated temperatures do form aromatic molecules such as naphthalene."

While the method used in this study sought to detail how specific types of chemical compounds form in space, the researchers noted that the methods used can also enlighten broader studies of chemical reactions involving radicals exposed to high temperatures, such as in the fields of materials chemistry and materials synthesis. ■