Staff writer ▼ | July 3, 2015
If you ever buy a fish at a pet store that died within days of being put in an aquarium at home then the answer may be in the plastic bag in which the fish traveled home. 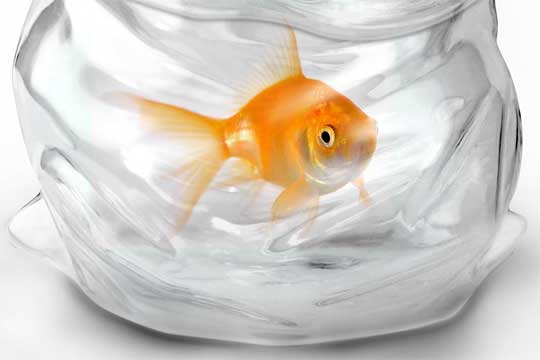 Chemistry   No all plastic bags are equal
This is according to research by University of Maine marine scientist Heather Hamlin.

Hamlin and colleagues discovered that certain plastic bags with FDA food-grade approval leach nonylphenol (NP) in concentrations that are highly toxic to fish.

The chemical NP—also found in food packaging, cosmetics and laundry and dish detergents—binds to estrogen receptors. Even at low concentrations, it mimics estrogen, which feminizes and alters fertility in fish, thus threatening their existence. NP also has been found to alter fish immune function and damage DNA.

Hamlin's findings, published in the journal Chemosphere, demonstrate that NP may pose a greater health risk to people, the ocean and to aquatic wildlife than can be predicted from examining properties of plastic from one manufacturer, which is the method the FDA currently uses to test for toxicity.

For the study, for 48 hours, captive-bred orchid dottybacks (Pseudochromis fridmani) were kept in synthetic seawater in Teflon bags, glass bowls or in plastic bags from one of two manufacturers. The FDA labels both types of plastic bags as food-safe polyethylene.

All of the fish in Teflon bags and glass bowls lived for the 48 hours, while 89 percent of the fish in one manufacturer's plastic bags survived, says Hamlin, a reproductive endocrinologist interested in mechanisms by which environmental factors influence aquatic animal reproduction and development.

In the other manufacturer's plastic bags (PE2), 60 percent of the fish died within the two days. Those that survived 48 hours in the plastic bags all died within eight days of being released in an aquarium. This, says Hamlin, demonstrates the exposure to NP caused irreversible damage to the fish.

In 48 hours, the NP concentration in the seawater in the PE2 bags was 163 parts per billion (ppb), which is nearly 24 times higher than the U.S. EPA water quality criteria for acute exposure of NP in seawater.

While this study tested for the ability of NP to leach into seawater, Hamlin says it's possible that food stored in the PE2 plastic bags could absorb increased levels of NP as well and that it's likely that risks to aquatic animals exposed to increasing quantities of plastic waste could be greater than previously realized. ■

Wilson Therapeutics appoints Hans Schikan to its board

Tesla deliveries surge by 52% to record in Q2

Biofouling survey for cargo vessels arriving in New Zealand
Tracing cosmic origin of complex organic molecules with radiofrequency footprint
Coronavirus: NASA invented wearable that reminds you not to touch your face
UN forecasts even warmer temperatures over next 5 years