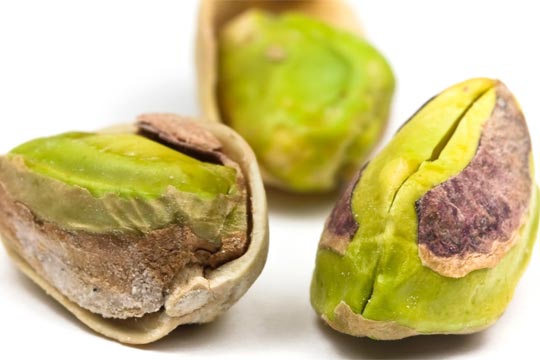 The wood-plastic nanocomposite can be used in the building industry, and it is resistant to humidity, loss of color and various types of fungi and insects. And in the best sustainable tradition, it has the added virtue of being derived from a locally generated source of filler material.

As one of the world's top pistachio producers, Iran annually produces and exports thousands of tons of pistachio nuts to other countries. The country therefore has ready access to a reliable source of pistachio shell waste. The structure of pistachio shell and its components, specifically cellulose, hemicelluloses and lignin, make this material an appropriate choice for the production of biocomposites.

The researchers looked at the effects of different loadings of nanoclay as a secondary reinforcement and two different UV stabilizers on the tensile properties, impact, loss of color and resistance to weathering of a pistachio shell flour/high-density PE composite.

Another study, which examined the effects of nanoclay particles and pistachio shell flour on the mechanical properties of wood-plastic composites carried out by researchers at Iran's Islamic Azad University at Karaj also turned up interesting findings. The results of this study showed that adding a 1% and 3% by weight loading of nanoclay particles to the formulation increased the impact resistance and the tensile strength; adding 5% nanoclay caused an increase in the bending strength, bending and tensile modules of wood-plastic composite.

Plastic wood composites, say the Iranian researchers, have a very good compatibility with the environment. The material they have created and studied is made of a locally sourced waste product and recyclable plastic materials. It requires less maintenance, resulting in lower costs, compared to rough wood, while at the same time displaying high resistance to decay, fungi and insects.

While promising, the next step that is indicated is a study on the feasibility of mass production of these pistachio-based nanocomposite materials. ■

CBS Outdoor names Susan Tolson to board of directors

England's first wild beavers for 400 years can stay
Five asteroids set to closely approach Earth this week
Asteroid will fly past Earth without any danger
Pentagon’s U.F.O. unit will make some findings public