Perfect pitch, a matter of survival

Staff writer ▼ | June 28, 2013
Only one in 10,000 people in the world has the ability to instantly recognize and reproduce a heard tone. For people in Vietnam perfect pitch is not a matter of good singing, it's a matter of survival. 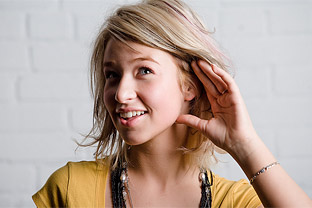 Only one in 10,000 people in the world has the ability to instantly recognize and reproduce a heard tone. For people in Vietnam perfect pitch is not a matter of good singing, it's a matter of survival.


Some people were born with the Holy Grail of music: they possess perfect pitch, also known as absolute pitch. Perfect pitch is the ability to recognize the pitch of a musical note without having to compare it to any reference note. You saw this more than once: a choir leader gives a reference tone with a music fork and the choir starts to sing. Well, people with perfect pitch don't need that starting tone.

Although it's not necessary to have a perfect pitch to be a great musician, it makes a musician's life much easier. The problem is that in the Western world a very small number of people, only one in 10,000, have that ability that is not completely explained yet. However, for people in Vietnam perfect pitch is not a matter of good singing, it's a matter of surviving.

Unlike western languages such as English, Vietnamese and Mandarin, two of East Asian languages, are tonal: the word's meaning often depends on the tone in which it is said. That is similar to using intonation to express different feeling like sarcasm, but in tonal languages a different tone give a different meaning to the word.

In a quest for musicians' Holy Grail, scientist conducted several studies around the world and have found a striking correlation between the tone recognition and country people were born in. East Asian tone language, Vietnamese in particular, seems to be a futile ground for perfect pitch.

A study at the University of Southern California's Thornton School of Music shown that students who spoke an East Asian tone language fluently scored nearly 100 percent on the perfect pitch test, those only fairly fluent in a tone language scored lower, and those with no connection with a tone language scored the worst. So, no matter how hard you study music and how much you invest in education, people from Vietnam will outperform you when it comes to perfect pitch.

So, if you can't tell which of two tones is higher or you must try several times before you sign a tune right, don't worry, you can still enjoy music. And you may start a course in Vietnamese, it won't guarantee you a place in a music history books but it may get you a step closer to an elite group of musicians. ■

Transporting fresh food across the globe without ice