Staff writer ▼ | January 28, 2015
Researchers have for the first time provided strong evidence for what conspiracy theorists have long thought - oil is often the reason for interfering in another country's war. 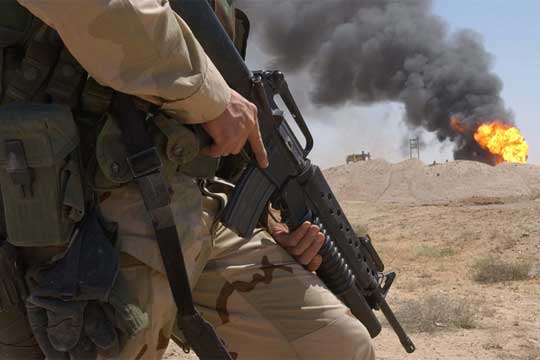 Research   Oil is often the reason for interfering in another country
Throughout recent history, countries which need oil have found reasons to interfere in countries with a good supply of it and, the researchers argue, this could help explain the US interest in ISIS in northern Iraq.

Researchers from the Universities of Portsmouth, Warwick and Essex modelled the decision-making process of third-party countries in interfering in civil wars and examined their economic motives.

They found that the decision to interfere was dominated by the interveners' need for oil over and above historical, geographical or ethnic ties.

Civil wars have made up more than 90 per cent of all armed conflicts since World War II and the research builds on a near-exhaustive sample of 69 countries which had a civil war between 1945 and 1999. About two thirds of civil wars during the period saw third party intervention either by another country or outside organisation.

Sekeris said: "We found clear evidence that countries with potential for oil production are more likely to be targeted by foreign intervention if civil wars erupt.

"Military intervention is expensive and risky. No country joins another country's civil war without balancing the cost against their own strategic interests and what possible benefits there are.

"We wanted to go beyond conspiracy theories and conduct a careful, nuanced analysis to see whether oil acts as an economic incentive in the decision on whether to intervene in an internal war in another country. The results show that outsiders are much more motivated to join a fight if they have a vested financial interest."

"We don't claim that our findings can be applied to every decision made on whether to intervene in another country's war, but the results clearly demonstrate supply of and demand for oil motivates a significant number of decisions taken to intervene in civil wars in the post-World War II period." ■

People worldwide think of colors the same way
Moving through time: How we escaped Big Bang
Can't pick a tie, man? Well, you don't see it