Staff Writer | July 6, 2017
For the past three years, NASA has been funding Kilopower, a project that aims to develop “a compact, low cost, scalable fission power system for science and exploration.” 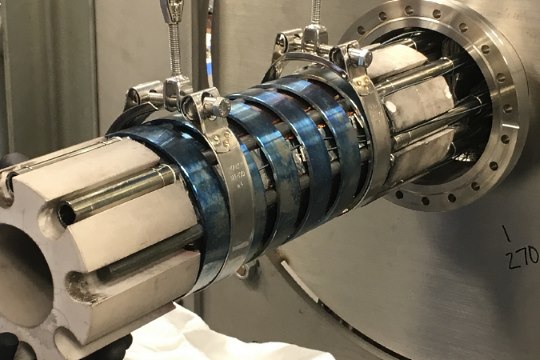 For space   Project Kilopower
The project’s budget is around $15 million, and in September, the agency will unveil the fruits of their labor — a 1.9 meters (6.5 feet) tall generator designed to produce up to 1 kilowatt of electric power — during testing at the Nevada National Security Site.

Although other alternatives for generating power have been put forward, none are as viable as fission. Solar energy, for instance, would require that astronauts stick to regions that receive an adequate amount of sunlight.

“If you want to land anywhere, surface fission power is a key strategy for that,” Michelle Rucker, an engineer at NASA’s Johnson Space Center, told Space.com.

Project Kilopower marks something of a fission resurgence for NASA after a hiatus of more than 50 years.

The last time the agency operated a fission reactor was in 1965, when they launched the Systems for Nuclear Auxiliary Power (SNAP) project.

That project resulted in radioisotope thermoelectric generators (RTGs) that are still used to power spacecraft today, as well as the nuclear-powered spacecraft SNAP 10A, which stopped working 43 days after it was launched into space due to an electrical component failure. ■