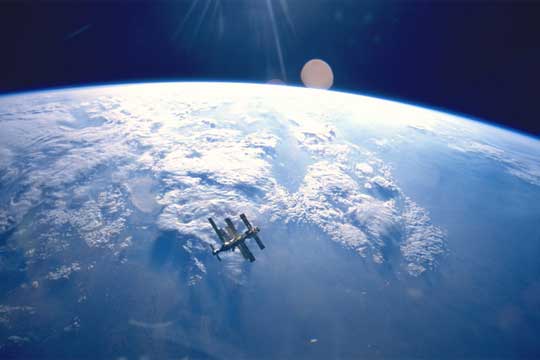 The beginning   Much earlier than scientists thought
The discovery indicates that life may have begun shortly after the planet formed 4.54 billion years ago.

"Twenty years ago, this would have been heretical; finding evidence of life 3.8 billion years ago was shocking," said Mark Harrison, co-author of the research and a professor of geochemistry at UCLA.

"Life on Earth may have started almost instantaneously," added Harrison, a member of the National Academy of Sciences. "With the right ingredients, life seems to form very quickly."

The new research suggests that life existed prior to the massive bombardment of the inner solar system that formed the moon's large craters 3.9 billion years ago.

"If all life on Earth died during this bombardment, which some scientists have argued, then life must have restarted quickly," said Patrick Boehnke, a co-author of the research and a graduate student in Harrison's laboratory.

Scientists had long believed the Earth was dry and desolate during that time period. Harrison's research—including a 2008 study in Nature he co-authored with Craig Manning, a professor of geology and geochemistry at UCLA, and former UCLA graduate student Michelle Hopkins—is proving otherwise.

"The early Earth certainly wasn't a hellish, dry, boiling planet; we see absolutely no evidence for that," Harrison said. "The planet was probably much more like it is today than previously thought." ■

Thank the moon for Earth's lengthening day
'True polar wander' may have caused ice age
Mars: Not as dry as it seems