Christian Fernsby ▼ | November 21, 2019
Gamma-ray bursts are the most powerful explosions in the cosmos. 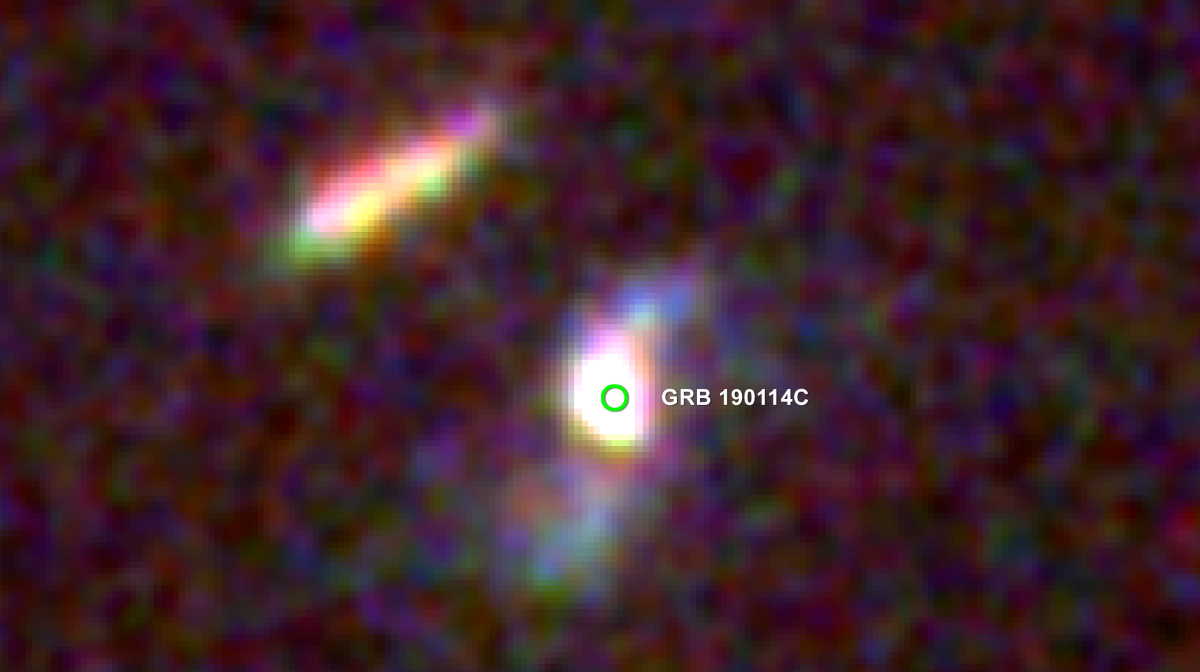 From space   GRB 190114C
These explosive events last a fraction of a second to several minutes and emit the same amount of gamma rays as all the stars in the universe combined.

Such extreme amounts of energy can only be released during catastrophic events like the death of a very massive star, or the merging of two compact stars, and are accompanied by an afterglow of light over a broad range of energies that fades with time.

It has been decades since the discovery of the first gamma-ray burst, yet some of their fundamental traits remain unclear.

An international team of researchers, including two astrophysicists from the George Washington University, Chryssa Kouveliotou and Alexander van der Horst, now has taken the next step in understanding the physical processes at work during these events with a recent discovery published today in the journal Nature.

The researchers observed a gamma-ray burst with an afterglow that featured the highest energy photons a trillion times more energetic than visible light ever detected in a burst.

"This very high energy emission had been previously predicted in theoretical studies but never before directly observed," Dr.

"After over 45 years of observing GRBs, we just confirmed the existence of yet another unknown component in their afterglows, which increases the gamma-ray burst overall energy budget dramatically," Dr. Kouveliotou, a professor of physics at GW, added.

The discovery triggered an extensive campaign of observations across the electromagnetic spectrum using more than 20 observatories and instruments around the world.

This collaborative effort allowed an international team to gather an unprecedented level of information about GRB 190114C, capturing the evolution of the gamma-ray burst afterglow emission across 17 orders of magnitude in energy.

As part of the joint efforts, Dr. van der Horst and Dr. Kouveliotou were part of a subteam responsible for tracking the emission of radio waves in the afterglow of GRB 190114C.

The team used the new MeerKAT radio telescope in South Africa to record the emission, which is at the opposite end of the spectrum compared to very high energy gamma rays.

"It is a great facility to observe this kind of event.

Our team is carrying out a multi-year program to observe many more gamma-ray bursts and other cosmic explosions in the coming years."

GRB 190114C is unique in that researchers were able to observe photons with teraelectronvolt (TeV) energies for the first time in its afterglow emission.

As expected though, this very high energy emission quickly faded in about half an hour after the event onset, while the afterglow emission in other parts of the spectrum persisted for much longer.

The researchers noted that the shape of the observed spectrum of afterglow light was indicative of an emission process called inverse Compton emission.

This event supports the possibility that inverse Compton emission is commonly produced in gamma-ray bursts.

"We are looking forward to understanding their physics and true energy release in gamma-ray bursts with more detections in the future." ■