Staff Writer | December 12, 2016
Scientists at the University of Sussex have invented a ground-breaking new method that puts the construction of large-scale quantum computers within reach of current technology. 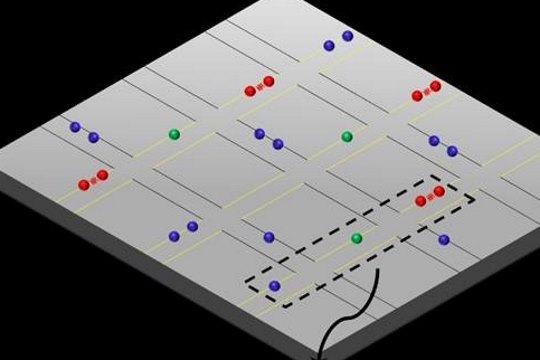 Science   The Ion Quantum Technology Group
Quantum computers could solve certain problems - that would take the fastest supercomputer millions of years to calculate - in just a few milliseconds.

They have the potential to create new materials and medicines, as well as solve long-standing scientific and financial problems.

Universal quantum computers can be built in principle - but the technology challenges are tremendous. The engineering required to build one is considered more difficult than manned space travel to Mars - until now.

Quantum computing on a small scale using trapped ions (charged atoms) is carried out by aligning individual laser beams onto individual ions with each ion forming a quantum bit.

However, a large-scale quantum computer would need billions of quantum bits, therefore requiring billions of precisely aligned lasers, one for each ion.

Instead, scientists at Sussex have invented a simple method where voltages are applied to a quantum computer microchip (without having to align laser beams) - to the same effect.

Professor Winfried Hensinger and his team also succeeded in demonstrating the core building block of this new method with an impressively low error rate at their quantum computing facility at Sussex.

Professor Hensinger said: "This development is a game changer for quantum computing making it accessible for industrial and government use. We will construct a large-scale quantum computer at Sussex making full use of this exciting new technology."

Quantum computers may revolutionise society in a similar way as the emergence of classical computers. Dr Seb Weidt, part of the Ion Quantum Technology Group said: "Developing this step-changing new technology has been a great adventure and it is absolutely amazing observing it actually work in the laboratory." ■