Giraffe and mango on new list of species facing extinction

Staff Writer | December 12, 2016
Over 700 newly recognized bird species have been assessed for the latest update of The IUCN Red List of Threatened SpeciesTM, and 11% of them are threatened with extinction. 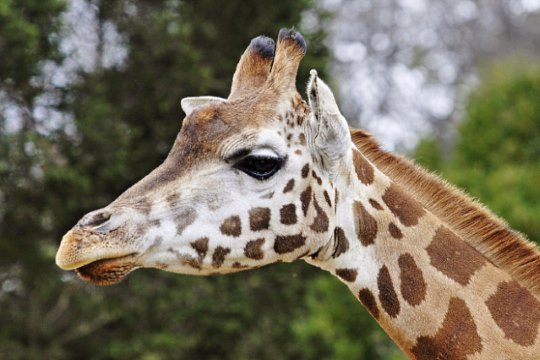 Nature   The IUCN Red List now includes 85,604 species
The update also reveals a devastating decline for the giraffe, driven by habitat loss, civil unrest and illegal hunting. The global giraffe population has plummeted by up to 40% over the last 30 years, and the species has been listed as Vulnerable on the IUCN Red List.

The IUCN Red List update also includes the first assessments of wild oats, barley, mango and other crop wild relative plants. These species are increasingly critical to food security, as their genetic diversity can help improve crop resistance to disease, drought and salinity.

The update was released at the 13th Conference of the Parties to the Convention on Biological Diversity (CBD COP13) in Cancun, Mexico. The IUCN Red List now includes 85,604 species of which 24,307 are threatened with extinction.

This IUCN Red List update includes the reassessment of all bird species. Thanks to a comprehensive taxonomic review compiled by BirdLife International, working in collaboration with the Handbook of the Birds of the World, the overall number of bird species assessed has reached 11,121.

A total of 742 newly recognized bird species have been assessed, 11% of which are threatened. For example, the recently described Antioquia wren (Thryophilus sernai) has been listed as Endangered as more than half of its habitat could be wiped out by a single planned dam construction.

Habitat loss to agriculture and degradation by invasive plants have also pushed the striking Comoro blue vanga (Cyanolanius comorensis) into the Endangered category.

Thirteen of the newly recognized bird species enter the IUCN Red List as Extinct. Several of these have been lost within the past 50 years -- such as the Pagan reed-warbler (Acrocephalus yamashinae), O'ahu akepa (Loxops wolstenholmei) and Laysan honeycreeper (Himatione fraithii).

All of these species were endemic to islands, and were most likely wiped out by invasive species.

IUCN Red List assessments also reveal that some of the world's most popular birds may soon disappear in the wild if appropriate action isn't taken.

Iconic species, such as the African grey parrot (Psittacus erithacus) - a prized pet with the ability to mimic human speech - are facing extinction in the wild due to unsustainable trapping and habitat loss.

Native to central Africa, the grey parrot has seen its conservation status deteriorate from Vulnerable to Endangered. A study led by BirdLife International discovered that in some parts of the continent numbers of grey parrots have declined by as much as 99%.

The situation is most pressing in Asia, with the rufous-fronted laughingthrush (Garrulax rufifrons), scarlet-breasted lorikeet (Trichoglossus forsteni) and Straw-headed bulbul (Pycnonotus zeylanicus) among a suite of species being uplisted to higher threat categories as a result of the impacts of illegal wildlife trade.

There is now evidence that unsustainable levels of capture for the cagebird trade, largely centred on Java, are driving the deteriorating status of many species.

However, there is good news for some of the rarest and most vulnerable birds on our planet - those that exist only on small, isolated islands. The Azores bullfinch (Pyrrhula murina), St Helena plover (Charadrius sanctaehelenae) and Seychelles white-eye (Zosterops modestus) are among the island endemic species to move to lower categories in this IUCN Red List update, as their populations recover from the brink of extinction thanks to tireless conservation efforts.

The iconic giraffe (Giraffa camelopardalis), one of the world's most recognisable animals and the tallest land mammal, is now threatened with extinction.

The species, which is widespread across southern and eastern Africa, with smaller isolated subpopulations in west and central Africa, has moved from Least Concern to Vulnerable due to a dramatic 36-40% decline from approximately 151,702-163,452 individuals in 1985 to 97,562 in 2015.

The growing human population is having a negative impact on many giraffe subpopulations. Illegal hunting, habitat loss and changes through expanding agriculture and mining, increasing human-wildlife conflict, and civil unrest are all pushing the species towards extinction.

A resolution adopted at the IUCN World Conservation Congress in September this year called for action to reverse the decline of the giraffe.

With this update, the first assessments of 233 wild relatives of crop plants such as barley, oats and sunflowers have been added to the IUCN Red List.

Habitat loss, primarily due to agricultural expansion, is the major threat to many of these species. The assessments were completed as part of a partnership between Toyota Motor Corporation and IUCN, whose aim is to broaden the IUCN Red List to include the extinction risk of many species that are key food sources for a significant portion of the global population.

Crop wild relatives are a source of genetic material for new and existing crop species, allowing for increased disease and drought resistance, fertility, nutritional value and other desirable traits.

Almost every species of plant that humans have domesticated and now cultivate has one or more crop wild relatives. However, these species have received little systematic conservation attention until now.

Native to South Asia, mangoes are now cultivated in many tropical and sub-tropical countries and they are one of the most commercially important fruits in these regions.

A relative of cultivated asparagus, hamatamabouki (Asparagus kiusianus), which is native to Japan, has been listed as Endangered due to habitat loss caused by urban expansion and agriculture.

Loss of habitat is also the main threat to the Anomalus sunflower (Helianthus anomalus) which has been listed as Vulnerable and is a relative of the sunflower (H. annuus).

Cicer bijugum, native to Iran and Turkey, is a wild relative of the chickpea (C. arietinum); it has been listed as Endangered due to habitat conversion to agriculture. ■

Hundreds more species at risk of extinction
Half of the Amazonian tree species are endangered
United Nations: Bees and other pollinators are shrinking toward extinction