Germany the most beloved country worldwide

Staff writer ▼ | November 25, 2013
A survey conducted by the BBC on which country has the most positive influence on world affairs put Germany at the top of the list. The United States did poorly, while China, Russia, and Israel saw their rankings decline. 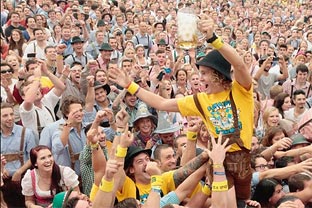 A survey conducted by the BBC on which country has the most positive influence on world affairs put Germany at the top of the list. The United States did poorly, while China, Russia, and Israel saw their rankings decline.


Of the 13,575 people questioned in 21 countries, a full 61 percent thought that Germany's influence on world affairs was "rather positive." This was the best score achieved by the 15 countries included in the survey.

Only 15 percent were of the opposite opinion. Germany thus improved its ranking by six points over the previous year. And that's not all: In none of the countries included in the survey was an overall negative impression of Germany detected.

The U.S. slid into 11th place, near the bottom of the list. 43 percent of survey-takers rated the United States' influence as "mostly negative." The result must be especially painful given that the survey was conducted from November 21 to February 1, after the election of Barack Obama as America's 44th president.

At least the image of the United States improved somewhat. In 2008, only 35 percent said they had a positive impression of the USA, while 48 percent expressed a negative opinion of the world's most powerful country. The same was not true for Russia and China. Whereas both of these countries enjoyed an overall positive ranking ahead of the United States in last year's survey, this year they dropped into negative territory behind the U.S.

40 percent of those surveyed had a negative impression of China's influence, while only 39 percent had a positive impression—despite the success of the 2008 Olympics.

"Our poll results suggest that China has much to learn about winning hearts and minds in the world," commented Doug Miller of the public opinion research firm Globescan, which carried out the survey.

The picture of Russia is more dramatic still: While 40 percent saw its influence in a negative light, only 30 percent rated it as "mostly positive." It seems that the gas conflict and Russia's intervention in the Caucasus left their mark. "The more Russia acts like the old Soviet Union, the less people outside its borders seem to like it," said Miller.

With Israel's war in Gaza fresh in people's minds, the country came in third-to-last, ahead of Pakistan and Iran. More than 50 percent of those surveyed judged its influence in world affairs as negative.

The BBC World Service conducts its annual survey of country images in 21 countries. Survey takers are not asked to back up their opinions. ■

Americans' top financial priority is keeping up with bills