Christian Fernsby ▼ | March 30, 2020
In a recent paper in the open-access journal Neotropical Biology and Conservation, a group of Brazilian scientists from the Federal University of Viçosa (Brazil) published ten different defensive behaviours for the False Coral Snake (Oxyrhopus rhombifer), seven of which are registered for the first time for the species. 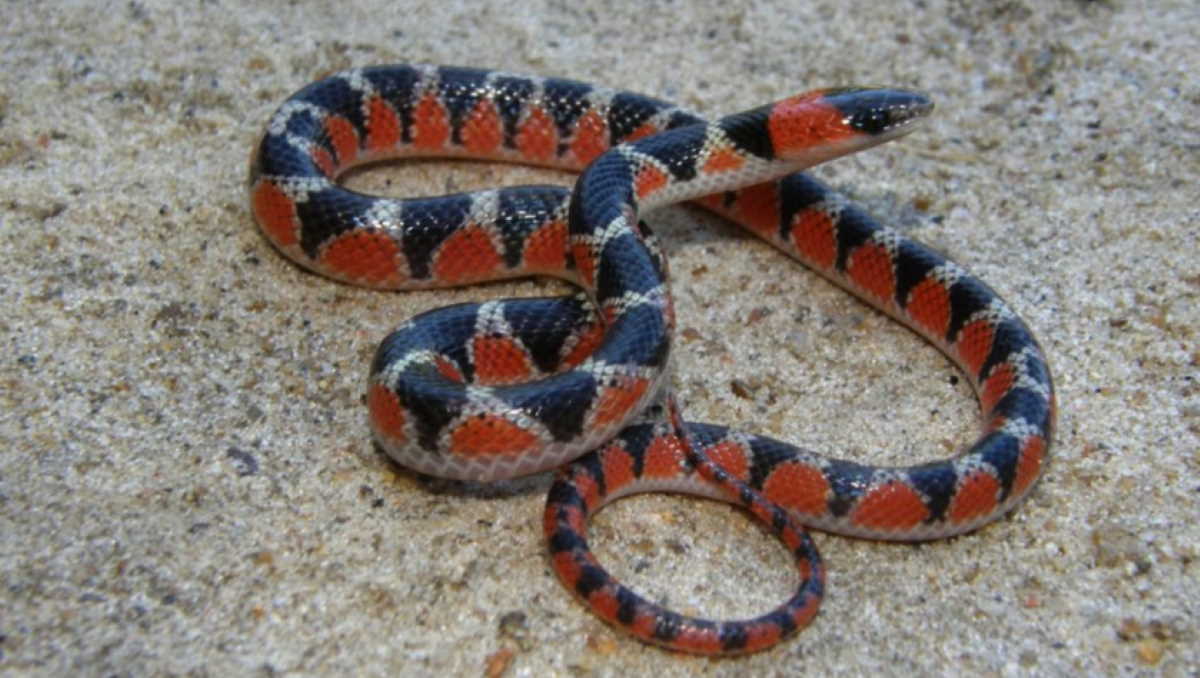 Animals   Oxyrhopus rhombifer
One of these is reported for the first time for Brazilian snakes.

Evolution shaped anti-predator mechanisms in preys, which can be displayed either with avoidance or defensive behaviours. The current knowledge about such mechanisms are still scarce for many snake species, but it is constantly increasing over the last years. These data are helpful for better understanding of the species ecology, biology and evolution.

The False Coral Snake (O. rhombifer) is a terrestrial snake species with a colouration like the true coral snake. The species has a wide geographic distribution, occurring in Argentina, Paraguay, Uruguay, Bolivia and all Brazilian biomes. Among its previously known anti-predator mechanisms, this species has already shown cloacal discharge, body flattening, struggling, erratic movements and hiding the head.

However, these behaviours were only a small part of what this species is capable of doing to defend itself! In November 2017, a juvenile male captured in the Atlantic Forest of southeastern Brazil was observed under laboratory settings, where the scientists would simulate a predation attempt with an increasing threat level.

"We released the snake on to the laboratory bench and let it notice our presence.

"The animal remained motionless at first, then performed a pronounced dorsoventral flattening of the anterior part of the body, raised its tail, adopted an S-shaped posture, raised the first third of the body and performed brief body vibrations.

"Then we approached the snake, which remained with the same posture and body vibrations.

"When we touched the animal (not handling), it remained with the S-shaped posture, keeping the first third of the body elevated and the dorsoventral flattening (however, less accentuated) and started to display erratic movements, false strikes and locomotor escape.

Amongst ten recorded behaviour types only three were among those already registered for this species. Since defensive responses in snakes decrease as body size increases, juveniles exhibit a broader set of defensive behaviour than adults. Because of that, some types of behaviour described in this study might be explained either by physical constraints or stage of development of the individual.

Some types of behaviour resemble the ones of true coral snakes of the genus Micrurus, a group of extremely venomous snakes. Thus, this similarity may be linked with the mimicry hypothesis between these two groups, where harmless false coral snakes take advantage of their similar appearance to the true coral snakes to defend themselves.

Another type of anti-predation mechanism shown -- body vibrations -- is yet an unknown behaviour for Brazilian snakes and has been recorded for the first time. This type of behaviour is difficult to interpret, but could represent a defensive signal against non-visually orientated predators.

Finally, defensive strategies of the specimen differed according to the threat level imposed: starting from discouraging behaviour up to false bites, erratic movements and locomotor escape."O. rhombifer may be capable of recognising different threat levels imposed by predators and adjusting its defensive behaviour accordingly," highlights Mr. Clodoaldo Lopes de Assis.

"Through such simple laboratory observations we can get a sense of how Brazilian snakes are yet poorly known regarding their natural history, where even common species like the false coral snake O. rhombifer can surprise us!" Mr. Clodoaldo Lopes de Assis adds in conclusion. ■

Some coronavirus patients still have virus after symptoms disappear