Compromise is criticized among men, embraced by women

Staff Writer | July 30, 2016
More isn't necessarily better when it comes to men making decisions together, especially if you want a middle-of-the-road compromise. 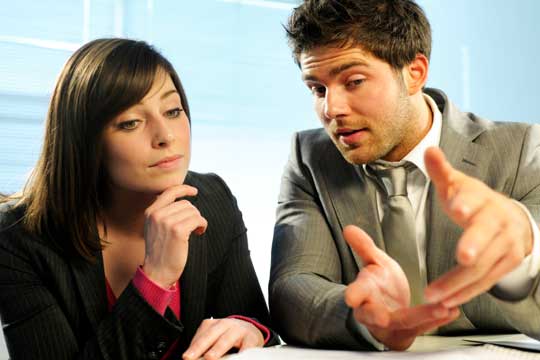 Research   For marketers, managers, and consumers alike
That's according to a new study in the Journal of Consumer Research which finds that compromise always occurs among two decision makers when a woman is involved (female-female pairs or mixed gender pairs), but hardly ever when the pair of decision makers are men. The findings could be pertinent to marketers, managers, and consumers alike.

"When men are in the presence of other men, they feel the need to prove their masculinity," says co-researcher Hristina Nikolova, the Coughlin Sesquicentennial Assistant Professor of Marketing with the Carroll School of Management at Boston College.

Titled "Men and the Middle: Gender Differences in Dyadic Compromise Effects" and published in the Journal of Consumer Research, the study was co-authored by Cait Lamberton, Associate Professor of Marketing with the Joseph M. Katz Graduate School of Business at the University of Pittsburgh.

"The decisions we make in pairs may be very different than those we make alone, depending on who we make them with," according to the study. "Classic compromise effects, AKA the 'goldilocks effect' or 'extremeness aversion,' may not emerge in all joint consumption decisions."

The studies involved different pairs of a man and woman, two women, and two men making decisions on such things as buying printers, toothpaste, flashlights, tires, hotels, headphones, different sizes and shapes of grills, what prizes to seek in a lottery, and whether to buy risky or safe stocks with corresponding high and low returns.

"No matter what the product is, we see the same effects," says Nikolova. "The compromise effect basically emerges in any pair when there is a woman. However, surprisingly, when you have men choosing together, they actually tend to push away from the compromise option and select one of the extreme options.

Say two men are choosing a car and the cars they are considering differ on safety and fuel efficiency - they will either go for the safest car or the one that offers them the most fuel efficiency, but they won't choose an option that offers a little of both." In contrast, individuals and mixed-gender and female-female pairs will likely go for the middle option since it seems reasonable and is easily justified.

Furthermore, because a female presence makes the masculinity of men in male-female dyads obvious, in these pairings we observe compromise behavior consistent with that of individual decision-makers and female-female dyads."

"In contrast to men," says Nikolova, "women act the same together as they would alone because they don't need to prove anything in front of other women. Womanhood is not precarious and does not need the same level of public defense as manhood. That's why we observe the compromise effect in the joint decisions of two female partners."

Interestingly, the research found that compromise is criticized among other men, but embraced by women.

Nikolova says the findings are something corporate American will want to pay attention to and gear campaigns around since the compromise effect is a robust phenomenon often used to manage assortments, position products, and drive sales. The findings of the study suggest that retailers and marketers should be aware of the gender composition of the joint decision-making pairs they might be targeting.

"For instance, marketers should be aware of the fact that when two men make decisions together, they are more likely to choose one of the extreme options. So if a company wants to push sales toward a particular option, and they expect their target customers to primarily be men making decisions together, then it's better to make the particular option an extreme option rather than a middle alternative."

For example, the findings can easily be applied by car sales people. When offering different cars and creating the choice set for their customers, car sales people need to pay attention to the gender composition of the decision-making pairs.

If a father and a son are purchasing the first car for the son together, it would be better for the sales person to make the particular car which he or she wants to sell (usually the most profitable one) an extreme option in the offered choice set (e.g., the one with the most fuel efficiency, the best interior design, or the highest horsepower.).

In contrast, if a male/female couple or a mother and a daughter are shopping together, it would be best to make that option a middle alternative in the choice set by adding other alternatives that offer less or more of the particular attribute.

Furthermore, Nikolova says if an organization wants more middle ground decisions made, it's critical to include a woman in the decision-making pair. In contrast, if a manager wants to "nudge" more all-or-nothing decisions, it is better to entrust them to two men.

As for consumers, it's important for male consumers to know what they might buy themselves is different from what they would choose with another man.

"What we're finding is when men have to choose alone, most select the compromise option," says Nikolova. "But when they have to make the decision with another man, they tend to choose one of the extreme options which is not something they would prefer if they were alone. It's important for male consumers to be aware of this when making decisions with other people since the drive to prove their masculinity might lead them to make decisions that they might not enjoy later." ■

Nearly $500 million in TIGER for safety and economic opportunity