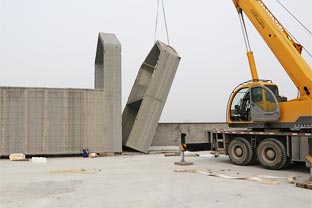 
According to a report from Chinese television CNC World, the Suzhou-based company spent 20 million yuan ($3.2 million) and 12 years developing its specialised additive manufacturing device, which can be used to 3D print self-supporting architectural structures.

The company demonstrated the technology by producing 10 stand-alone houses in the space of a day, which will be used as offices at an industrial park in Shanghai. Each building has 3D-printed walls and structure. The only sections not produced by the printer were the roofsm the company says this won't be possible until the technology becomes more advanced.

The process took place at Yingchuang New Materials's factory, where a 3D-printing assembly line makes use of up to four printers at at a time. This building also features 3D-printed walls.