Staff writer ▼ | January 23, 2014
China is reportedly building a 10,000-ton class marine surveillance vessel, the largest of its kind in the world. 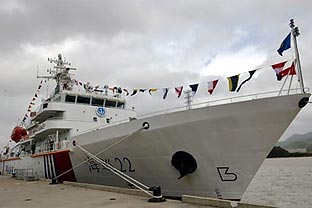 China is reportedly building a 10,000-ton class marine surveillance vessel, the largest of its kind in the world.


Analysts said the ship, with a higher continuous voyage capability than current Chinese ships, could better cope with conditions in the South China Sea and safeguard the country's maritime interests.

According to a report by the Beijing Times, China Shipbuilding Industry Corporation (CSIC) recently said on its official website that it signed contracts in 2013 to build two kinds of marine surveillance ships, one of them 10,000 tons. However, the information was no longer available on the company's website on Tuesday.

CSIC's spokesman Liu Zhengguo Tuesday declined to confirm the news to the Global Times, saying it would take days to verify the information. If confirmed, the vessel under construction would surpass Japan Coast Guard's two 6,500-ton vessels to be the world's largest patrol ship. The China Coast Guard's (CCG) largest patrol ships in service have a tonnage of 4,000.

China Ocean News reported that a 5,000-ton class patrol ship will be deployed to the waters around Sansha, China's newest city, set up to consolidate the country's claim over the South China Sea.

Li Daguang, a professor at the National Defense University of the People's Liberation Army, said that building large tonnage vessels has become a trend in shoring up China's maritime strength, as the fleet of the patrol ships used to be made up of outdated vessels as well as retired warships, which were refitted. ■

Aviva CFO to step down