Staff Writer | July 13, 2017
Australian scientists on Thursday described the breaking-off of a one-trillion-ton iceberg from Antarctica as "deeply troubling." 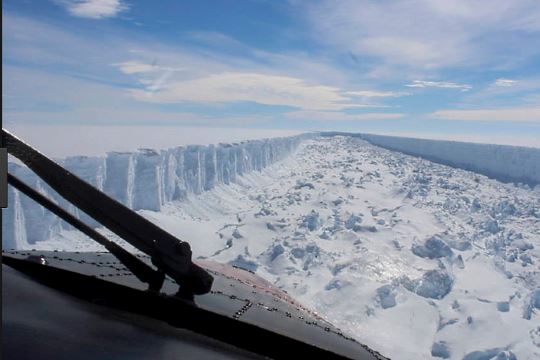 It was the third such incident in the part of Antarctica closest to South America after the Larsen A and B shelves collapsed in 1995 and 2002, respectively.

Nathan Bindoff, head of the Oceans and Cryosphere Program at the Institute of Marine and Antarctic Studies (IMAS), said that the break-away would accelerate the thinning of ice in Antarctica, meaning more breakaways are imminent.

"Big icebergs breaking off the major ice-shelves are a critical component of the story around the fate of the Antarctic Ice Sheet," Bindoff said in a statement obtained by Xinhua on Thursday.

"The ice shelves buttress the Antarctic Ice Sheet and slow the rate of ice loss from Antarctica. So a major iceberg like this one means we will see an acceleration of the grounded glaciers behind the Larsen C shelf.

"Amazingly, this glacier acceleration will contribute to further sea-level rise in next few years. We saw precisely this behavior for sea-level when the Larsen B ice shelf broke up."

Despite the collapse being a natural process, Ian Simmonds, a professor at the School of Earth Sciences at the University of Melbourne, said man-made global warming had accelerated the process. ■

Boost to satellite communications in Australia