Staff writer ▼ | June 4, 2015
The German capital Berlin has declared war on housing shortages and soaring costs of living and a new law seeks to crack down on landlords overcharging new tenants. 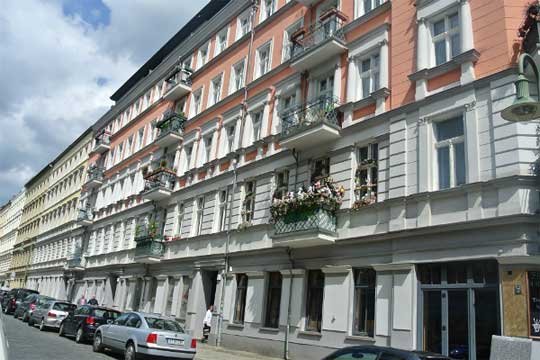 Housing   Skepticism as Berlin takes on rising rents
But critics say the regulation has more holes than Swiss cheese, Deutsche Welle reports. Berlin this week became the first German city to impose a cap on rents, limiting price increases on new leases to ten percent above the local average in areas with housing shortages.

The rent-control law marks the capital's latest effort to rein in exploding costs of living, as the booming metropolis struggles to adapt to a new reality, which stands in stark contrast to the city's former claim to fame, "poor but sexy" - Berlin's unofficial motto, coined by recently retired mayor Klaus Wowereit.

For years, a seemingly endless abundance of airy apartments, low rents, and cheap beer attracted would-be bohemians from around the world. But as demand rose so did rents. Whereas rents averaged just over 5.50 euros ($6) per square meter in 2005, it had shot up to nearly 9 euros last year.

As a result, many landlords developed a taste for out-of-towners, often accustomed to much higher costs of living in places like Australia, the UK, and the US.

In some cases, rents have jumped as high as 40 percent on new leases, according to the Berlin Tenants' Association. In the process, more and more local, low-earning Berliners have been squeezed out of their old neighborhoods, and forced to relocate to more affordable quarters on the fringes of town.

The so-called "rent brake," which the national parliament approved in March, is an attempt to do exactly what the name suggests: slam the brakes on breakneck rent hikes, and halt the growing rift between the haves and have nots, which is tearing at the social fabric of the German capital.

Effectively, the cap means that if an apartment currently costs 6 euros per square meter, the landlord cannot legally raise the price to more than 6,60 euros. At least, that is the theory.

But a string of legislative loopholes has already prompted many critics to label it a failure - even though the new law has been in effect for less than 48 hours.

The Berlin Tenants' Association (BTA) has repeatedly warned that the wording leaves landlords with too many avenues to circumvent the new regulations. For instance, the law does not apply to newly built apartments which went on the market after October 1, 2014. Apartment buildings that have been comprehensively renovated are also exempt from the new rules.

But one of the most alarming loopholes, critics say, is the fact that the "brake" only seeks to slow down net rent increases. This allows greedy landlords to continue to take advantage of tenants desperate to gain a foothold on Berlin's competitive property market, Deutsche Welle reports.

For instance, owners could charge residents more for utilities, such as heating, water, waste disposal, or general maintenance.

Another major cause of concern: The new rules do not apply to short-term leases. The BTA worries this could lead to landlords offering up less and less long-term contracts, making it even more difficult for young families to plan for the future.

While many see the cap as a much-needed step in the right direction, the fight for affordable housing is far from over. ■

Safestay appoints Philip Houghton to board