Christian Fernsby ▼ | June 19, 2020
A team of astronomers, including researchers at MIT, has picked up on a curious, repeating rhythm of fast radio bursts emanating from an unknown source outside our galaxy, 500 million light years away. 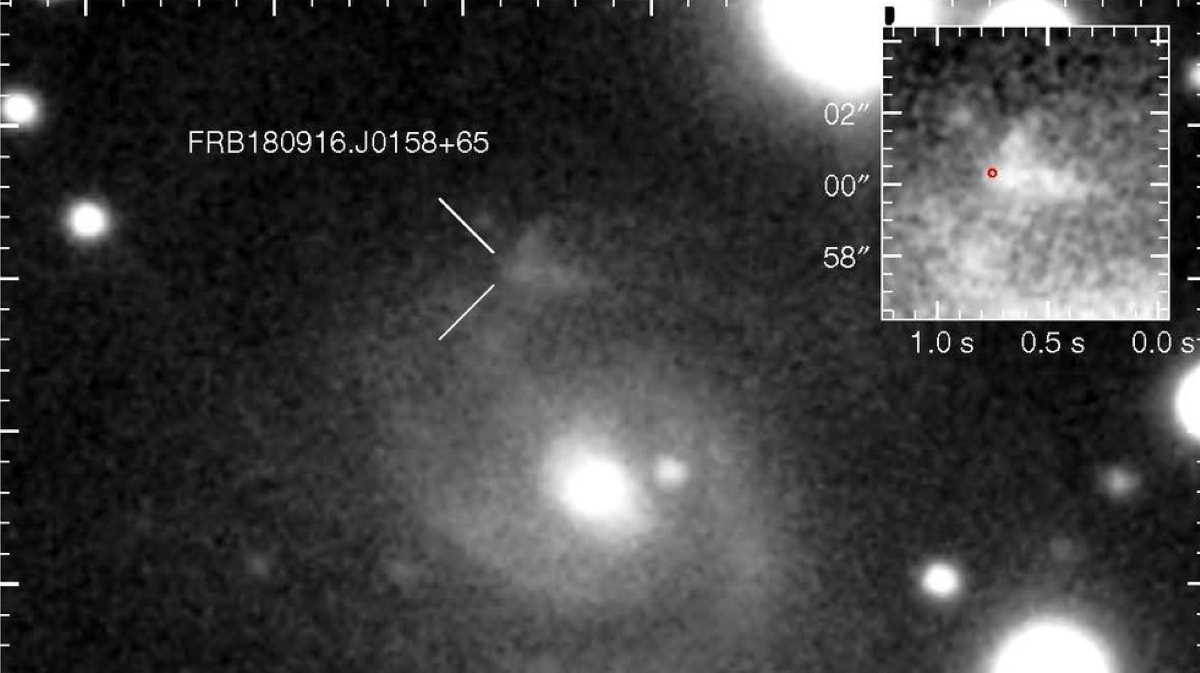 Radio   FRB 180916.J0158+65
Fast radio bursts, or FRBs, are short, intense flashes of radio waves that are thought to be the product of small, distant, extremely dense objects, though exactly what those objects might be is a longstanding mystery in astrophysics. FRBs typically last a few milliseconds, during which time they can outshine entire galaxies.

Since the first FRB was observed in 2007, astronomers have catalogued over 100 fast radio bursts from distant sources scattered across the universe, outside our own galaxy. For the most part, these detections were one-offs, flashing briefly before disappearing entirely. In a handful of instances, astronomers observed fast radio bursts multiple times from the same source, though with no discernible pattern.

This new FRB source, which the team has catalogued as FRB 180916.J0158+65, is the first to produce a periodic, or cyclical pattern of fast radio bursts. The pattern begins with a noisy, four-day window, during which the source emits random bursts of radio waves, followed by a 12-day period of radio silence.

The astronomers observed that this 16-day pattern of fast radio bursts reoccurred consistently over 500 days of observations. "This FRB we're reporting now is like clockwork," says Kiyoshi Masui, assistant professor of physics in MIT's Kavli Institute for Astrophysics and Space Research. "It's the most definitive pattern we've seen from one of these sources. And it's a big clue that we can use to start hunting down the physics of what's causing these bright flashes, which nobody really understands."

Masui is a member of the CHIME/FRB collaboration, a group of more than 50 scientists led by the University of British Columbia, McGill University, University of Toronto, and the National Research Council of Canada, that operates and analyzes the data from the Canadian Hydrogen Intensity Mapping Experiment, or CHIME, a radio telescope in British Columbia that was the first to pick up signals of the new periodic FRB source.

The CHIME/FRB Collaboration has published the details of the new observation today in the journal Nature.

In 2017, CHIME was erected at the Dominion Radio Astrophysical Observatory in British Columbia, where it quickly began detecting fast radio bursts from galaxies across the universe, billions of light years from Earth.

CHIME consists of four large antennas, each about the size and shape of a snowboarding half-pipe, and is designed with no moving parts. Rather than swiveling to focus on different parts of the sky, CHIME stares fixedly at the entire sky, using digital signal processing to pinpoint the region of space where incoming radio waves are originating.

From September 2018 to February 2020, CHIME picked out 38 fast radio bursts from a single source, FRB 180916.J0158+65, which the astronomers traced to a star-churning region on the outskirts of a massive spiral galaxy, 500 million light years from Earth. The source is the most active FRB source that CHIME has yet detected, and until recently it was the closest FRB source to Earth.

As the researchers plotted each of the 38 bursts over time, a pattern began to emerge: One or two bursts would occur over four days, followed by a 12-day period without any bursts, after which the pattern would repeat. This 16-day cycle occurred again and again over the 500 days that they observed the source.

"These periodic bursts are something that we've never seen before, and it's a new phenomenon in astrophysics," Masui says.

Exactly what phenomenon is behind this new extragalactic rhythm is a big unknown, although the team explores some ideas in their new paper. One possibility is that the periodic bursts may be coming from a single compact object, such as a neutron star, that is both spinning and wobbling an astrophysical phenomenon known as precession. Assuming that the radio waves are emanating from a fixed location on the object, if the object is spinning along an axis and that axis is only pointed toward the direction of Earth every four out of 16 days, then we would observe the radio waves as periodic bursts.

The researchers considered a third scenario, involving a radio-emitting source that circles a central star. If the star emits a wind, or cloud of gas, then every time the source passes through the cloud, the gas from the cloud could periodically magnify the source's radio emissions.

"Maybe the source is always giving off these bursts, but we only see them when it's going through these clouds, because the clouds act as a lens," Masui says.

Perhaps the most exciting possibility is the idea that this new FRB, and even those that are not periodic or even repeating, may originate from magnetars -- a type of neutron star that is thought to have an extremely powerful magnetic field. The particulars of magnetars are still a bit of a mystery, but astronomers have observed that they do occasionally release massive amounts of radiation across the electromagnetic spectrum, including energy in the radio band.

"People have been working on how to make these magnetars emit fast radio bursts, and this periodicity we've observed has since been worked into these models to figure out how this all fits together," Masui says.

Very recently, the same group made a new observation that supports the idea that magnetars may in fact be a viable source for fast radio bursts. In late April, CHIME picked up a signal that looked like a fast radio burst, coming from a flaring magnetar, some 30,000 light years from Earth. If the signal is confirmed, this would be the first FRB detected within our own galaxy, as well as the most compelling evidence of magnetars as a source of these mysterious cosmic sparks. ■