How medical education can strike back on doctors

D. Alwinsky, M.D. ▼ | May 6, 2017
You learned hard as a student and as an experienced doctor you have successfully treated a number of patients. But, at one point in your life, everything you learned may start to work against you. 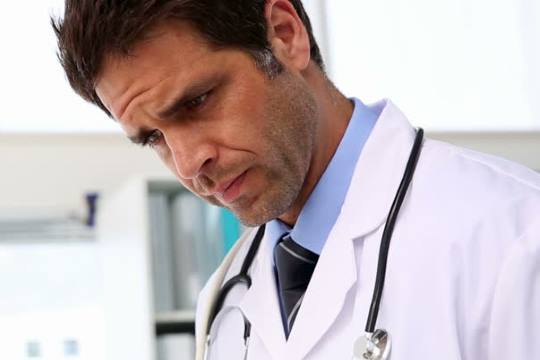 Doctors   Presenting themselves late for treatment
As a student you learn about symptoms to be able to recognize diseases and while your knowledge is still weak, you tend to think that every skin change you spot on yourself could be a cancer; every cough that last long could be TBC, every stomach pain could mean something serious is going on... And you check your blood and ask your student colleges for their opinion.

So, why aren't you doing that as an experienced doctor?

Doctors, as any other part of the general population, are prone to diseases. From simple "fall and cut" to serious mental problems, they can affected just like anybody else.

But, contrary to common sense, doctors may be bad patients, presenting themselves late for treatment, and the outcome can be very bad: a life-threatening condition or the end of the career.

There are several reasons for doctors’ failure to seek timely help - a lot of doctors don't even have their own GP - and they are interwoven and must be understand from several points of view.

There are several types of personalities among doctors but they all are characterized by one very strong attribute: They are doctors.

One doesn't become a doctor because there are no other options, like may be the case in some other professions. Doctors are aware from early on that they want to heal other people and they have a very clear idea what they will be later in life.

Before even enrolling the medical school, they are active in community service as a preparation for their life choice. They are the best students around, guided by the idea they must be the best to succeed and be good doctors.

And when the university life starts, the private life ends. Friends are other medical students, they spend almost all of their time learning and working at the hospital, and their home becomes merely a place to spend the night: their real home is now the hospital and their family is a group of other doctors.

Along the way, students are prepared to "behave like a doctor." They speak their own language, they are trained to be self-confident, they learn how to act fast and without doubt, and they are treated like a very special part of the society.

And when they get the right to wear the uniform and use letters "Dr." they are getting what will follow them in every aspect of their lives. They are not some John Smith anymore, they are Dr. Smith. And that becomes their personality.

In every society, from most primitive ones, in the anthropological sense, a healer has the special place in the society. If you heal just one person, from that moment on you are special, the one that beat the death itself.

Through the years, societies and institutionalization of their professional identity created so-called "medical self," a strong sense of being special and above other people.

Now, self-confidence is a must because it helps doctors do their job under stressful situations when every move they make may save or destroy a life. Along with the medical career, the feeling of invincibility rises too.

Doctors see so many difficult life situations, and they solve so many hard cases, they really start to think - consciously or subconsciously - that they are invincible.

But, when doctors get sick, all those characteristics are working against them. We must emphasize here that not all of them are bad patients, but when they are, consequences may be fatal.

For a doctor, it's hard to ask for help.

First, there is fear that the colleagues will see that as a weakness, which inevitably leads to a halt in the career, or even the end of it.

Then, society - and even the doctor’s family - tends to see that as a fall from the throne of the almighty healer.

Thus, doctors, living medicine as a life, not just one part of their lives, tend to cope with the problem themselves.

Doctors always have excuses when they are sick, spoken or unspoken: I don't have time, I have my patients waiting; My needs are not important, my patients are; If I ask for help that is a failure and there's no room for failure in doctor's life...

All those excuses come from just one single point: Doctors are trained to be the ones that don't ask for help - they help others.

Since a doctor is a "doctor" every single minute of the day, it is very hard for them to act like a patient.

They know symptoms, they know the possible outcome, they know how much time they have before the situation become critical, but that's not the key: The key is "I will lose my place in the system I've been my whole life in and I will lose respect."

The profession and the personality became one that that's the problem.

And when a doctor becomes a patient, that's a very difficult patient.

First, they have their own idea how to treat them. Second, they want their condition to be treated as fast as possible. And under the radar if possible. And third, they are afraid what their colleagues will think.

However, whatever the condition, when a doctor does become a good patient - the results are very, very good. From a simple disease to serious mental problems, like alcohol or drugs use, the recovery rate for doctors is very high, and in many cases better than for a general population.

That may sound surprising but there is a reason for that: Doctors are trained to be perfectionists. When they start their treatment, they will do all that's needed to get things right.

Experience shows that among the hardest cases, like opiod use, when a doctor ends the treatment, she will almost never go that way again. And "almost" means that you'll have a hard time find the one that repeated the mistake, used opioid again or failed to search for help again.

So, this is the irony: The very same thing that makes doctors bad patients, helps them to be very good patients.

And if you are a doctor and feel sick or have any other condition that you know requires a look or two, remind yourself of school days. Get over that fear and ask your colleagues for help. You will be even better doctor after that. ■

More than 25% of new doctors may be depressed
China bans online medical diagnoses
Prevention or drugs? Is that the question?