Abraham Eisenstein, M.D. ▼ | May 3, 2013
Children heart has bigger power reserves than adult heart but it is more prone to a rheumatic inflammation and when it is hit it is more vulnerable than adult's. However, when various myocardial and valvular damages occur children heart heals much faster. 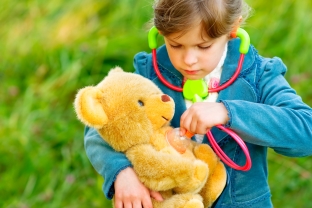 Children heart has bigger power reserves than adult heart but it is more prone to a rheumatic inflammation and when it is hit it is more vulnerable than adult's. However, when various myocardial and valvular damages occur children heart heals much faster.


Cardiovascular system of a child is different than that in adults. First, the volume of blood pumped through the heart in one beat is much lower in children. That means that children have higher heart rating. It's not unusual to measure heart rate above 200 in children running around and that doesn't mean something wrong is going on. They also have lower blood pressure because they are smaller.

Second, the higher frequency of breathing is usual in children because they have a lower tidal volume. Adults can be upset when they see a child catching breath but that fact alone is not something to be worried about.

Also, children are less aware of their condition than adults and they easily tolerate pain and have not yet established a standard for normal and abnormal. Normally active child will not complain without good reason and will more likely underestimate than overestimate her/his physical sensations.

The point of symptoms is to follow them in time: if they are persistent or there's a mix of them, a doctor should check heart to see is everything OK or there is another test that should be done.

Congenital heart disease, or CHD, is a heart disease that a baby is born with. To be more precise, that's not a disease but an abnormality of the heart or its blood vessels. Thanks to modern medicine, most of the children born with a heart defect can undergo a treatment and will after that live as any other child. As a rule of thumb, serious problems are diagnosed at birth and mild ones will come to the surface later in life.

Coarctation of the aorta is the condition when the main artery leaving the heart is constricted. Then there is transposition of the great arteries or, in plain English, the two arteries leaving the right and left sides of the heart are switched. The most severe condition is Tetralogy of Fallot, and that is a complex heart condition with several defects.

Acquired heart diseases are condition that are not present at birth but acquired later in life. Two most known conditions are rheumatic heart disease and Kawasaki disease.

Rheumatic heart disease is a condition when the heart is damaged because of rheumatic fever, a disease caused by streptococcal bacteria. The problem here is that it usually starts as an infection that was not recognized and treated. It affects both children and young adults and numbers are dark: 233,000 deaths, especially in poor countries. However, even countries like Australia have a significant number of children with that condition.

The condition can be prevented by treating throat infections caused by group A streptococcus with antibiotic. When the condition is already all around the heart, a surgery is required to repair or even replace heart valves.

Kawasaki disease is a condition with unknown cause. It is most common in Japan but it is also present in the whole world. It affects young children, 80% of them under the age of five, and boys are affected more than girls. This condition can be recognized by fever, rash, swollen hands and feet, bloodshot eyes, swollen lymph nodes, and an acute inflammation of the blood vessels.

There are general symptoms that may indicate a heart problem in children but we should be careful because they are not a definite signs of a disease because of the difference between a young and an adult organism.

I met its soul