Staff Writer | May 2, 2018
Japan’s manufacturing sector expanded at a quickened pace during April amid improved growth rates in output and new orders. 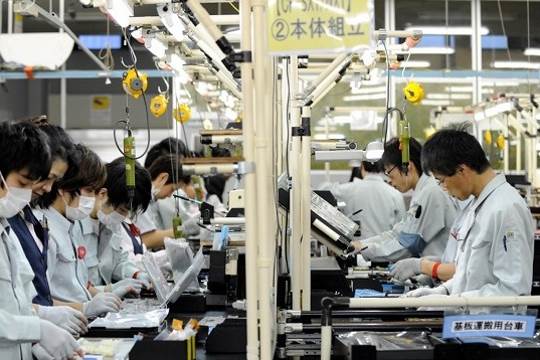 Nonetheless, greater staff levels did not prevent backlogs of work from increasing.

On the price front, inflation rates for both input costs and output charges softened.

The headline Nikkei Japan Manufacturing Purchasing Managers’ Index (PMI) – a composite single-figure indicator of manufacturing performance – posted 53.8 in April, up from 53.1 in March to signal a solid improvement in operating conditions for Japanese manufacturers.

For the first time since January, the headline PMI figure increased and thereby signalled a stronger rate of growth in the sector.

A twenty-first consecutive month of rising production in the Japanese manufacturing sector was recorded in April.

The rate of growth in output was solid overall and the fastest since January.

According to anecdotal evidence, production line activity was raised in line with greater sales and rising backlogs of work.

The gain in new business was equally solid and faster than the previous survey period.

Panellists attributed the improvement in demand to new product launches.

That said, sales to overseas clients increased at a markedly slower rate during April.

The rate of new export order growth was marginal overall and the weakest observed across the current 20-month expansionary sequence.

The current stint of employment growth extends back to September 2016.

Despite larger workforces, outstanding business increased and to a greater extent.

Although the accumulation of backlogs was only moderately sized, it was the joint-largest in five months (on a par with December 2017).

Postproduction inventories have decreased in each of the past seven survey periods.

In fact, the rate of expansion in purchasing activity quickened from March’s eight-month low.

That said, average lead times for the delivery of inputs slowed markedly amid reports of material shortages.

To counteract this, output prices were increased, albeit to the softest extent in three months.

In fact, the degree of confidence strengthened for the first time since the start of the year amid forecasts of a sustained upturn in demand. ■