Staff Writer | December 7, 2017
Germany’s construction upturn showed signs of losing momentum in November, as growth in total industry activity eased to a ten-month low amid the first drop in new orders for more than a year, according to the latest PMI survey data from IHS Markit. 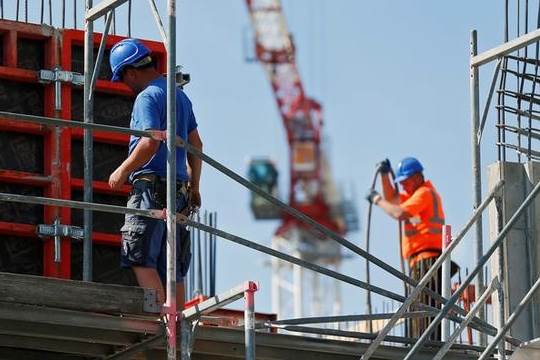 Germany   IHS Markit Germany Construction PMI
Constructors took on new staff and raised their purchases of raw materials as they pressed on with outstanding projects, but in both cases the rate of growth eased further from recent peaks.

Business confidence towards the outlook also moderated to its lowest in 12 months.

The headline seasonally adjusted Purchasing Managers’ Index (PMI ) – which measures changes in the level of total industry activity compared with one month ago – registered 53.1 in November, down from 53.3 in October.

The latest figure marked a thirty-fourth straight month of growth in total industry activity and was well above that seen on average over the survey’s 18-year history (47.4).

However, having fallen for the fourth month in a row, the headline index was at its lowest level since January.

November saw solid increases in both housing and commercial construction activity, with the former showing a faster pace of growth than the month before.

Civil engineering activity, on the other hand, fell for the first time in 12 months, dropping at the sharpest rate since August 2015 and weighing on IHS Markit Germany Construction PMI overall industry performance.

The level of new orders taken on by constructors decreased slightly and for the first time in over a year in November.

Anecdotal evidence pointed to a drop in tenders from the recently high levels, but also found instances where full utilisation of resources had prevented building companies from accepting new orders.

The survey’s indicator of future expectations meanwhile sank to its lowest level since November 2016, signalling only modest optimism compared with the peaks seen in the first half of the year.

Employment continued to rise mid-way through the fourth quarter as constructors looked to increase capacity.

The pace of job creation was strong, but eased further from September’s recent peak.

The use of sub-contractors also increased more slowly than in recent months. ■