Staff Writer | May 11, 2018
Asia continues to be the main engine of the world’s economy, accounting for more than 60 percent of global growth—three-quarters of which comes from China and India alone. 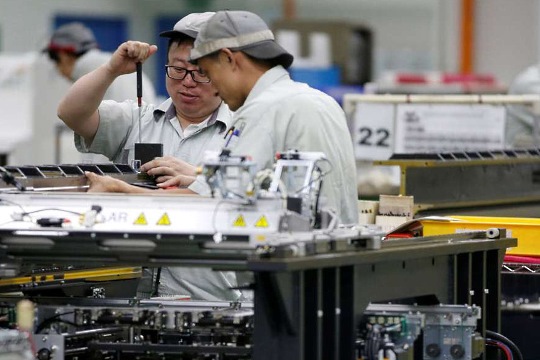 APAC   Regional Economic Outlook
But there are risks and challenges ahead, including from a tightening of global financial conditions, a shift toward inward-looking policies, and—over the longer run—population aging, slowing productivity growth, and the rise of the digital economy, according to the IMF's latest regional report.

The good news is that strong growth is expected to continue in the near term.

The Regional Economic Outlook: Asia and Pacific (REO) forecasts growth for Asia at 5.6 percent this year and next. The outlook is supported by strong global demand, as well as still accommodative policies and financial conditions.

China’s growth is expected to moderate to 6.6 percent in 2018 as financial, housing, and fiscal tightening measures take effect.

Growth in Japan has been above potential for eight consecutive quarters and is expected to remain strong at 1.2 percent this year.

In India, growth is forecast to rebound to 7.4 percent in FY 2018/19 as the economy recovers from disruptions related to the currency exchange initiative and the rollout of the new Goods and Services Tax.

Growth in ASEAN is projected to stay at 5.3 percent both this year and next, reflecting strong investment and consumption across several countries.

In most of the rest of the region, including small states and Pacific island countries, growth is also expected to be strong.

Present rates of inflation in Asia are some of the lowest in decades.

Since September 2017, headline inflation in the region has ticked up on the back of rising oil prices. But core inflation—which excludes food and energy—remains low and below target in many economies.

In 2017, headline inflation on average was 0.6 percent lower than target in Asian advanced economies, and 0.8 percent under target in Asian emerging market economies. As the chart shows, many countries across the region had inflation below target over the past two years.

The latest report explores why inflation has been so low. And it finds that first that temporary global factors, including commodity prices and imported inflation, have been key drivers of low inflation. But these factors could reverse, and inflation could rise.

According to the report, inflation has become more backward-looking, meaning that past inflation drives current inflation more than future expectations. This suggests that if inflation rises, it may persist.

Further, there is some evidence that the sensitivity of inflation to economic slack has decreased (i.e., the Phillips curve has flattened), suggesting that if inflation rises, there may be a large hit to output when reducing it.

All of these mean that central banks should watch out closely for signs of inflation pressure now and stand ready to respond.

According to the report, there are both upsides and downsides to the forecast. Although they largely balance out in the near term—over the medium term, the downside risks dominate.

On the upside, growth momentum could be more durable than expected amid strong consumer and business confidence and still loose financial conditions. The rollout of the fiscal stimulus in the U.S. as well as a stronger recovery in the euro area could lift global growth, with positive spillovers to Asia.

But over the medium-term, Asia is vulnerable to a tightening of global financial conditions, spurred by higher U.S. interest rates, which could trigger capital outflows.

Further, a global shift toward inward-looking policies would be worrying given Asia’s trade openness—suppressing Asia’s exports and reducing foreign direct investment in the region.

And over the longer term, Asia faces a number of important challenges from population aging, slowing productivity growth, and the digital revolution, which of course brings huge opportunities along with risks. ■

Finland trade balance swings to EUR 144 million surplus
Industrial production down 17.1% in euro area and 17.3% in EU
Ukraine Q1 GDP decreased 1.3% compared to Q1 last year
GDP down 3.6% and employment down 0.2% in the euro area